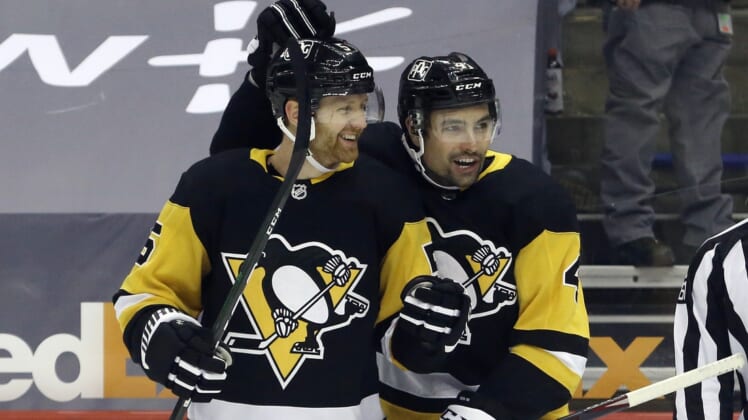 Sidney Crosby, Bryan Rust and Evan Rodrigues each had a goal and an assist Tuesday for the Pittsburgh Penguins, who took a six-goal lead, then held on to hand the visiting New Jersey their seventh loss in a row, 7-6.

Scott Wedgewood started in goal for the Devils after Mackenzie Blackwood was a fairly late injury scratch. In one period, Wedgewood yielded four goals on 13 shots. Aaron Dell entered in the second period and finished with 16 saves.

The Devils also were without defenseman P.K. Subban, who went on the NHL’s COVID protocol list.

Pittsburgh got things going at 3:49 of the first. Matheson’s blast from the center point made it through traffic and past Wedgewood’s blocker.

Rust made it 2-0 at 8:04 of the first period. From the right side, Crosby banked a cross-rink feed off the far boards. Rust took it, swooped in and tucked it inside the far post.

Dumoulin made it 3-0 just 45 seconds later when he flipped the puck in from outside the blue line. It bounced and knuckled past Wedgewood’s glove.

Carter scored his first goal as a Penguins player at 17:56 of the first, rifling a shot from the slot to make it 4-0.

With Dell in, Blueger converted a backhanded pass from Rodrigues for a 5-0 Penguins lead at 1:12 of the second.

Hischier cut the deficit to 6-1 during a five-on-three power play with a sharp-angle shot 41 seconds into the third, and Sharangovich’s short-hander at 5:14 of the third made it 6-2.

Foote scored his first career goal in his second game, making it 7-5 with 6:04 left to get New Jersey within 7-5. Johnsson banked the puck in off Jarry with 40.3 seconds left.