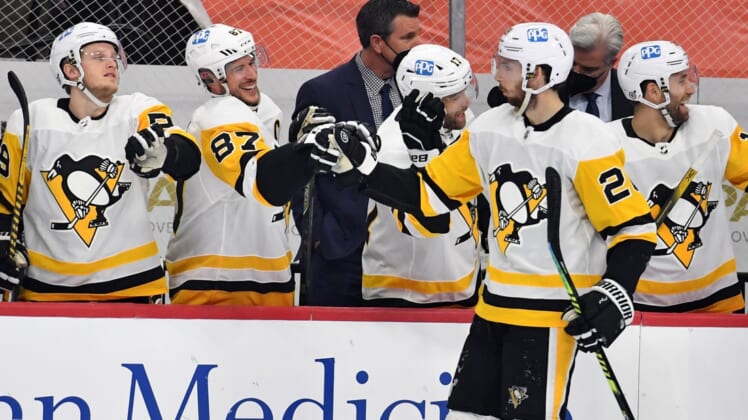 Sidney Crosby had two goals and an assist Tuesday as the visiting Pittsburgh Penguins moved into first place alone in the East and got some redemption with a 7-3 win over the Philadelphia Flyers.

The Flyers, who are out of the playoffs, had routed Pittsburgh 7-2 on Monday.

Jake Guentzel had a goal and two assists for Pittsburgh (35-16-3, 73 points), which has clinched a playoff spot and moved two points ahead of the Washington Capitals atop the East Division standings. The Capitals, however, have two more games remaining than do the Penguins.

In addition Tuesday, Marcus Pettersson a goal and an assist, while Jason Zucker, Mark Friedman and John Marino also scored for Pittsburgh.

Pettersson gave Pittsburgh a 1-0 lead just 1:44 in the first period when he got the puck from Jared McCann to Elliott’s right, went forehand to backhand as he avoided a poke-check and scored in far side.

Guentzel’s power-play goal at 3:10 of the second gave Pittsburgh a 2-0 lead. After Kris Letang broke his stick on a shot from the center point, Guentzel partially fanned on a shot that slid under Elliott’s pads.

Less than three minutes later, the Penguins pushed the score to 3-0. Pettersson’s shot got blocked but went to Crosby in the lower right circle, and Crosby steered the puck around Philadelphia’s Ivan Provorov and past Elliott.

Braun cut it to 3-1 at 8:21 of the second. After a scramble for a rebound, Braun got the puck to Jarry’s right and scored from a sharp angle.

Couturier closed it to 3-2 with 1:20 left in the second. His pass from the left circle took a sharp turn off the skate of Pittsburgh’s Jeff Carter and went under Jarry’s pads.

At 7:49 of the third Zucker lifted the puck past Elliott’s blocker to make it 4-2.

The Flyers again made it a one-goal game, 4-3, at 10:23 of the third when Konecny’s shot from the right-wing boards caromed in off Marino’s skate.

Crosby answered at 12:33 of the third when he rifled a shot from the left dot to the far top corner for a 5-3 Pittsburgh lead.

Friedman added an empty-netter with 4:07 left, and Marino netted a power-play goal with 3:03 remaining.