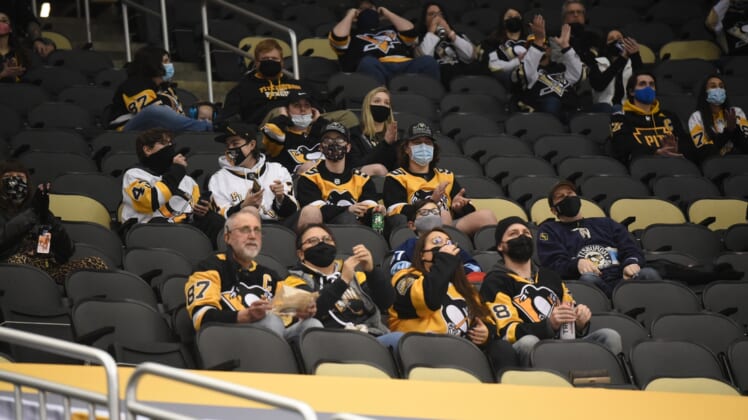 Mar 2, 2021; Pittsburgh, Pennsylvania, USA; Fans look on from the stands during the game between the Pittsburgh Penguins and the Philadelphia Flyers in the first period at PPG Paints Arena. Mandatory Credit: Philip G. Pavely-USA TODAY Sports

Social media users are calling a penalty on the Pittsburgh Penguins for altering a photo to make fans look as if they were wearing their required face masks properly.

The Penguins tweeted a photo Wednesday night with spectators in the stands at PPG Paints Arena for the first time since the start of the coronavirus pandemic nearly one year ago. The photo is accompanied by a caption that reads, “We just had to say this again… Thanks for the continued support, Penguins fans. We can’t wait to see you tomorrow night.”

But a Pittsburgh-area reporter posted an original photo from Getty Images that showed three fans wearing masks improperly — and one woman maskless — and compared it with the image posted by the team.

In the photo shared by the Penguins, the masks of the three people cover their noses, which they didn’t in the original, and the maskless woman is cropped out.

“Whoever made the decision to photoshop masks on fans in this photo should be fired, and the team should apologize. This is a historic pandemic that’s killed over 500,000 – and your franchise player has missed ice time because of it,” one man wrote, referring to Penguins star Sidney Crosby, who is out because of league health and safety protocols. “You can do better than lying to the public.”

The team released a statement Thursday.

“While perhaps well intended, our staffer should not have altered a wide crowd photo to adjust masks on faces of even a few fans who were not strictly following the rules. Our social media team should never send out altered photos to our fan base. This is a violation of our social media and safety policy, and this staffer has been disciplined,” the statement said.

The team also said “they are taking all precautions to enforce the use of masks to keep our fans safe” and adopting a “zero-tolerance policy.”

The Penguins beat the Philadelphia Flyers 5-2 on Tuesday night and will host them again Thursday night in the second of a three-game series. The team hadn’t played at home in front of spectators since March 8, 2020.