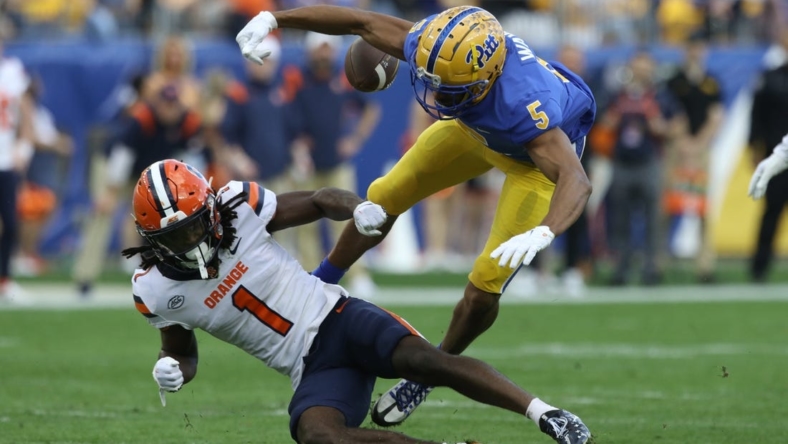 Rodney Hammond Jr. ran for 124 yards and a touchdown and C’Bo Flemister also rushed for a score Saturday as Pitt snapped a two-game skid with a 19-9 home victory over No. 20 Syracuse.

The Panthers (5-4, 2-3 ACC) overcame nine penalties for 73 yards and two interceptions — one by quarterback Kedon Slovis (16 of 23, 178 yards) and one by wideout Jared Wayne on his only pass attempt.

Standout tailback Sean Tucker ran for just 19 yards on 10 carries for Syracuse (6-3, 3-2), which lost its third straight game. The Orange played without quarterback Garrett Shrader (concussion), with Carlos Del Rio-Wilson going 8 of 23 for 120 yards in his place.

Syracuse dented the scoreboard first, shortly after Ja’Had Carter intercepted Slovis in the end zone. The Orange methodically drove down the field and took a 3-0 lead on Andre Szmyt’s 23-yard field goal — the 12th play of the drive — with 26 seconds left in the first quarter.

Pitt answered back with a touchdown on its next possession as Hammond found the end zone on a 6-yard rush.

The teams then exchanged punts before the Orange got within 7-6 on Szmyt’s 48-yard field goal with 3:44 remaining until intermission. However, the Panthers squeezed in a field goal of their own before halftime, with Ben Sauls booting a 43-yarder in the waning seconds.

Flemister accounted for the only scoring of the third quarter when he registered a 1-yard TD run in the final two minutes of the period. The big play of the possession for the Panthers was a 23-yard pass from Slovis to Wayne (six catches, 102 yards) that set up the hosts with a first-and-goal at the 1.

Szmyt missed a 46-yard field goal early in the fourth, although he did drain a 49-yarder with 4:52 to play to get the visitors within 17-9.

With under two minutes left, Pitt punter Sam Vander Haar pinned Syracuse at its own 1. On the next play, Deslin Alexandre sacked Del Rio-Wilson for the game-clinching safety.