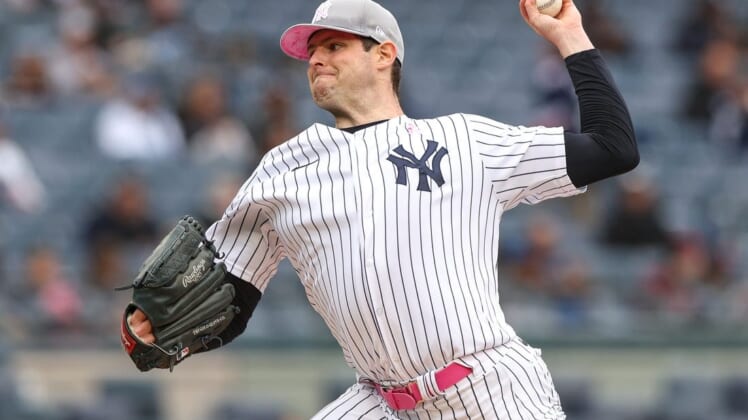 The New York Yankees have the best record in baseball, and over the last three games, their standout pitching staff has proven especially stingy in giving up hits.

Coming off two straight bids for a perfect game and then a combined one-hitter, the Yankees look to continue their run of stellar pitching Sunday when they host the Detroit Tigers. The finale of the three-game series will also be a chance for the Yankees to extend their winning streak to six games.

On Saturday, after New York’s Luis Severino allowed only Miguel Cabrera’s second-inning single during his seven-inning stint and relievers Michael King and Clay Holmes completed the one-hitter, the Yankees walked away with a 3-0 win.

Severino allowed only one other baserunner, a walk to Derek Hill in the third inning. His dominant outing came two days after Jameson Taillon retired the first 21 hitters in a 2-1 win over the Los Angeles Angels and one day after Gerrit Cole set down the first 20 batters in a 13-0 victory in the series opener with Detroit.

“It’s been special to watch them go at it. They’ve been so for a while,” Yankees manager Aaron Boone said. “We talk about passing the baton in the lineup. Well, they’re doing it from the starting staff. Every day we’re getting that kind of outing.

“I try not to take that for granted. What a good place all five of those guys are in.”

Saturday marked the seventh time in 10 games that the Yankees have yielded no runs or one run. New York’s pitching has allowed 12 runs in the past 10 games.

Detroit took four of five from Minnesota before heading to New York, but the Tigers have mustered four hits, struck out 22 times and drawn just one walk after scoring 19 times in their four wins over the Twins.

“We didn’t do much, one walk and one hit,” Detroit manager A.J. Hinch said after his team struggled immensely against Severino. “He was very dominant. He got us to chase when he needed to.”

Next up for the Yankees is left-hander Jordan Montgomery (1-1, 3.04 ERA), who goes on Sunday. Montgomery has allowed three runs or fewer in each start this year and is attempting to win consecutive starts for the first time since mid-April 2018, shortly before he underwent Tommy John surgery.

Montgomery ended an 11-start winless stretch and picked up his first win since Sept. 21 when he allowed one run and four hits and tied a career high by pitching seven innings in a 9-1 rout of the Angels on Tuesday.

Montgomery faced the Tigers in Detroit on April 21 and took the loss despite surrendering only one run on three hits and two walks in six innings. The Yankees were shut out 3-0.

Starting for the Tigers on Sunday will be right-hander Rony Garcia (0-1, 4.70 ERA), who spent time in New York’s minor league system before being picked by Detroit with the first selection of the 2019 Rule 5 draft. He will be making his fifth career start and third this season.

Garcia experienced mixed results in a pair of outings against the Twins last month. He held them to two runs in four innings on May 25, but then he was tagged for six runs in five innings in the first game of a doubleheader on Tuesday, an 8-2 loss.

In one-third of an inning against the Yankees as a reliever, Garcia allowed a run and a walk on April 19.