Pitching in question as Marlins seek series win vs. Phillies 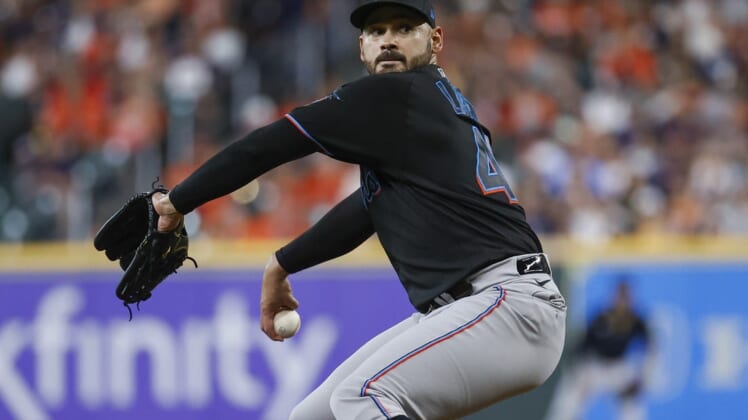 The Miami Marlins rallied for an 11-9 victory over the host Philadelphia Phillies on Tuesday, and now they will now look for a series victory in the finale on Wednesday afternoon.

Jesus Aguilar hit a go-ahead, two-run double in the ninth inning and also had a two-run home run to lead the Marlins. Miami’s Avisail Garcia, Jacob Stallings and Jazz Chisholm Jr. each homered as well.

“I’m really proud of everybody on the team,” Aguilar said in a postgame interview on Bally Sports Florida. “I think that’s what we can do. We can do a lot of good things.”

Even when the Marlins trailed 8-4 after five innings and 9-8 entering the ninth, they didn’t panic.

“It’s a funny game,” Miami manager Don Mattingly said postgame. “We don’t score much last night and we get 11 tonight. We did whatever we had to do, and it was good to see it.”

Aguilar added, “It’s a crazy game. We battled 27 outs. We’re facing a really good team. We got a good win.”

Pablo Lopez, who would have been in line to start for the Marlins on Wednesday, is unavailable due to right wrist soreness. His latest bullpen session prompted the team to scratch him from the upcoming start.

It was uncertain whether the Marlins would go with a bullpen game.

“He’s obviously getting better, but with his history, we want to make sure he’s 100 percent before he goes back out there,” Mattingly said of Lopez. “That one’s up in the air.”

Mattingly added that the starting pitcher would be announced on Wednesday.

The Phillies will aim to rebound after an ugly defeat.

Corey Knebel endured his fourth blown save of the season when he gave up three runs and two walks without getting an out in the ninth inning, though the runs were unearned. Knebel had been struggling recently with right shoulder stiffness, and he clearly battled with his command.

Neither were the Phillies, particularly the bullpen, which allowed seven runs in three innings.

“It’s disappointing,” Thomson said. “The offense really battled to take the lead and then we gave it back.”

Following the defeat, the first baseman was hardly concerned with statistics.

Yairo Munoz started at second base on Tuesday after being promoted from the minors when the Phillies sent Mickey Moniak to Triple-A Lehigh Valley. Moniak was hitting just .160.

“We just want him to go down and get his swing back,” Thomson said. “Mickey is a big part of this club and in the future.”