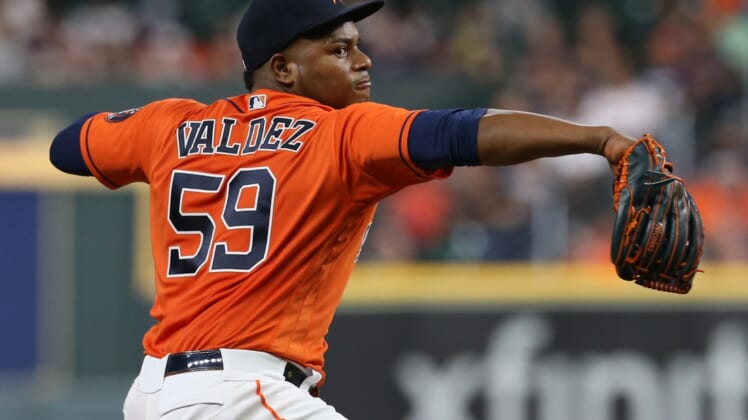 Two pitchers who have demonstrated a liking for the postseason spotlight match up Friday afternoon when the Houston Astros look to go up 2-0 over the visiting Chicago White Sox in Game 2 of the American League Division Series.

It was exactly the type of performance Astros manager Dusty Baker had hoped would result from his team having earned the right to play the first two games of the best-of-five in Houston by virtue of recording two more wins than the White Sox in the regular season.

In a game that featured just three extra-base hits, Baker credited his club’s aggressive baserunning and put-the-ball-in-play mentality as being the chief differences in the series opener.

“The little things is like stacking pigs: You do the little things, they add up to big things,” he noted. “Those are the things that (if) you don’t do them, they usually come back to haunt you, because all these games are going to be close.”

Baker will next hand the ball to left-hander Framber Valdez (11-6, 3.14 ERA), who will be seeking to pick up where he left off in the first round of last year’s playoffs.

The 27-year-old is 3-1 with a 1.88 ERA in four postseason appearances, including three starts. The first of those starts came in the AL Division Series last year, when he threw seven sharp innings in a 5-2 win at Oakland in Game 2.

Valdez earned that start on the strength of five shutout innings of relief, allowing two hits, in a 4-1 win at Minnesota in Houston’s playoff opener last September.

He had mixed success against the White Sox earlier this season, beating them 7-3 with seven effective innings at home in June, before losing a rematch 4-0 in Chicago a month later, allowing all four runs.

He’s 1-1 with a 3.38 ERA against Chicago in three career games, including two starts.

Valdez will be asked to match pitches with White Sox right-hander Lucas Giolito (11-9, 3.53), who went the distance, striking out eight, in a 10-1 home win over the Astros in July.

The 27-year-old’s one and only previous postseason start was a doozy. He shut down the A’s on two hits over seven innings in a 4-1 win in Game 1 of their first-round series last year.

The White Sox failed to advance past that series, even with it being a best-of-three, after Giolito’s gem.

Chicago manager Tony La Russa assured following Thursday’s loss that he’s seen series make quick turnarounds, including 10 years ago when his St. Louis Cardinals lost Game 1 in each of their two National League series before rebounding to win both and advance to the World Series.

“You’d like to have it. It’s definitely an edge,” he said of Game 1. “(But) I could give you a handful of times we lost the first game, like 2011, and came back and did all right. So you’ve got to win three. Every one you get is valuable, and the first opportunity, we definitely wanted it, and they got it. We’ll be ready to compete (Friday).”