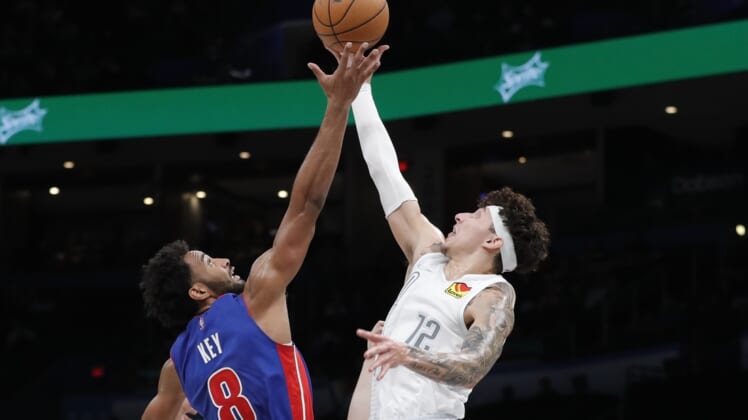 Killian Hayes and Frank Jackson scored 26 points each to lift the Detroit Pistons to a 110-101 road win over the Oklahoma City Thunder on Friday.

The bottom three teams in the league have the best odds to win the first overall pick in this summer’s NBA Draft.

The draft lottery permeated the game, with the lineups making it clear winning wasn’t a priority for either side.

For the third consecutive game, the Thunder had just eight players available.

After Aleksej Pokusevski was ruled out with flu-like symptoms, Oklahoma City added Jaylen Hoard via a 10-day contract using a hardship exception.

The Pistons weren’t quite as short-handed as the Thunder, as they had nine players available. However, three Detroit starters — Cade Cunningham, Saddiq Bey and Isaiah Stewart — checked out for good by the time there was four minutes left in the first quarter.

Bey missed his only shot from beyond the arc, snapping his streak of 51 consecutive games with at least one 3-pointer.

Cunningham, a Rookie of the Year candidate, had just two points in his lone appearance of the season in the state where he starred as a freshman at Oklahoma State last season before entering the draft.

The Pistons took control with a 21-2 run in the third quarter to grab a 20-point lead. Jackson scored nine points that stretch while the Thunder were just 1 of 13 from the floor.

Hayes had career highs in points and minutes (40).

Detroit rookie Isaiah Livers had career highs in points (17) and rebounds (11), while Saben Lee had a career-high 12 assists to go with 11 points.

Hoard, playing his second game with the Thunder this season after appearing in 19 last season, made his first career start and finished with a career-high 20 rebounds. Hoard’s previous career high was seven boards.

Hoard’s rebound total was the highest by an Oklahoma City player this season.