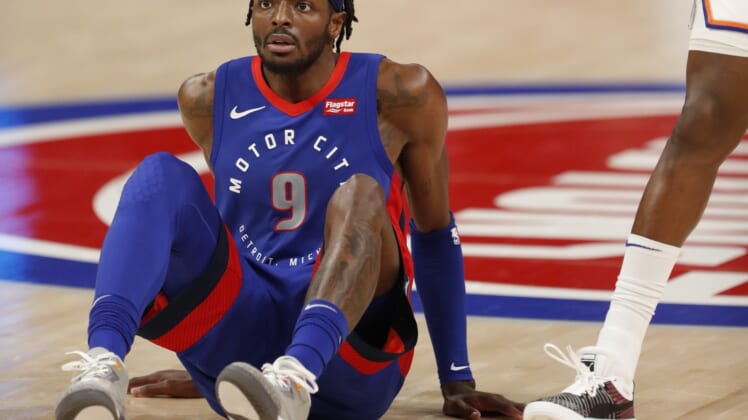 The Detroit Pistons and Oklahoma City Thunder are both eager to move past their most recent games.

The two teams head into their meeting on Monday in Oklahoma City coming off some of their worst losses in franchise history.

Oklahoma City’s 133-85 loss at Portland on Saturday was the largest margin of defeat in Thunder history, while the Pistons’ 125-81 home loss to the New York Knicks was the franchise’s worst since another 44-point loss more than 27 years ago.

“As a team, we have to decide who we want to be — do we want to be a team full of guys trying to get our numbers?” Detroit coach Dwane Casey said. “I’ve got to coach better and get them ready.”

The Pistons have lost six of their last eight games.

Oklahoma City comes into Monday’s game having lost five of its last six, including both games on its quick two-game road trip by a combined 85 points.

“These ones sting obviously,” Thunder coach Mark Daigneault said. “Nobody’s feeling good after that. The question is, what do you do with it? What we have to do with it is we’ve gotta learn the lesson.”

The game will be the first between the teams since a mid-March trade sent Svi Mykhailiuk to Oklahoma City and Hamidou Diallo to Detroit.

Mykhailiuk struggled on the road trip, going just 3 of 12 from the floor and 0 of 5 from 3-point range. This effort comes after he led the Thunder with 22 points in a 113-103 win over Toronto on Wednesday.

Mykhailiuk has been part of Oklahoma City’s overhaul. None of the Thunder’s starters from the season opener have been available lately, with Shai Gilgeous-Alexander and Darius Bazley dealing with long-term injuries, Luguentz Dort in concussion protocol, Al Horford shut down for the season and George Hill first injured and then traded.

Diallo has played just four games since the trade, sitting out on the latter half of back-to-back sets after dealing with a groin strain he sustained with the Thunder.

Diallo is shooting 58.8 percent from the floor and 55.6 percent from behind the 3-point line with the Pistons. It’s a small sample size but it’s been a surprising leap for Diallo after he attempted less than one 3-pointer per game in his 129 career games with Oklahoma City.

“He plays hard,” Casey said. “He runs the floor, he plays at that pace that’s just hard to compete against on most nights.”

Both of the teams’ two meetings this season will come within a two-week stretch, with the other coming April 16 in Detroit.

The Thunder have won five consecutive games over the Pistons, with Detroit’s last win over Oklahoma City coming in November 2017.