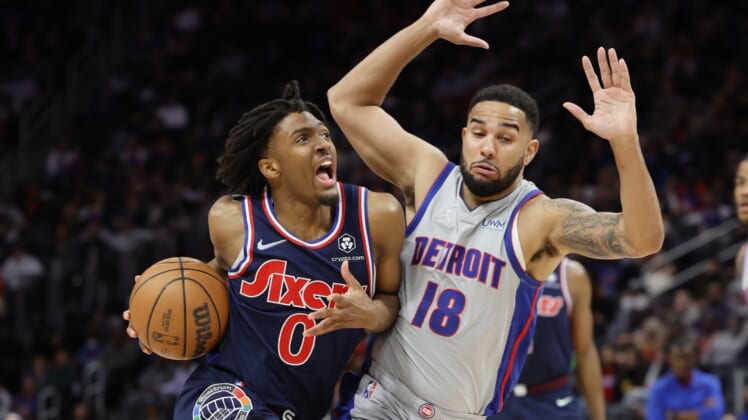 Cade Cunningham had 27 points, six assists and four steals and the host Detroit Pistons outscored the Philadelphia 76ers 29-15 in the fourth quarter to claim a 102-94 victory on Thursday.

Saddiq Bey had 20 points for Detroit (21-56), which snapped a three-game losing streak, while Kelly Olynyk contributed 12 points, four rebounds and three assists. Killian Hayes added 10 points and three steals and Isaiah Livers tossed in nine points for the Pistons, who never led until the fourth quarter.

Joel Embiid carried the Sixers (46-30) with 37 points and 15 rebounds but he also committed seven turnovers. James Harden had 18 points, nine rebounds and seven assists but shot 4-for-15 from the field. Tobias Harris had 14 points and Tyrese Maxey chipped in 13.

The Pistons’ Marvin Bagley suffered a left hip flexor strain after getting fouled by Embiid in the third quarter and departed after shooting free throws.

The Sixers outscored the Pistons 18-4 at the free throw line in the first half and led 54-50 at the break. Embiid scored 10 of his 18 first-half points on foul shots and Harden made six free throws en route to 14 points. Philadelphia didn’t have a lead bigger than eight thanks to Cunningham, who scored 14 points before halftime.

Detroit’s Cory Joseph tied the game at 60 early in the third with a 3-pointer. Philadelphia soon had a 10-2 spurt, including four points from Embiid, to reestablish an eight-point advantage. Detroit clawed back within three points but Embiid scored seven in the last 1:46 of the quarter to give Philadelphia a 79-73 lead heading into the fourth.

A 7-0 spurt put Detroit in front for the first time, 86-85. Cunningham capped that off with a layup. Livers and Bey knocked down 3-pointers to give the Pistons a 93-87 advantage with 4:23 left.

Bey’s layup after a Cunningham steal increased the lead to eight points. After another Sixers turnover, Cunningham fed Olynyk for a layup to make it 99-89. A Bey 3-pointer then ended all suspense.