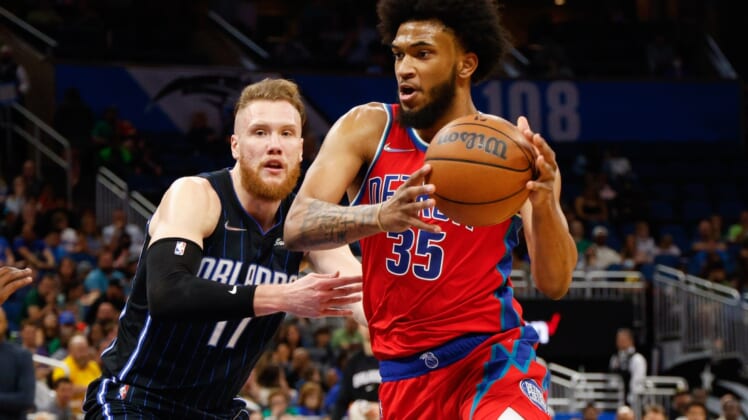 If the Cleveland Cavaliers fall just short of their goal at the end of the year, they’ll know exactly where to look.

They have lost two of three games against the Detroit Pistons this season, with the teams’ final matchup coming on Saturday in Cleveland.

The Cavaliers head into the game on the tail end of a back-to-back set, having defeated the visiting Denver Nuggets 119-116 in overtime on Friday.

Detroit snapped a four-game losing streak with a 134-120 road victory over the Orlando Magic on Thursday when forward Saddiq Bey erupted for a career-high 51 points.

“I didn’t come into the game saying this is what I’m going to do, but you catch a rhythm and you get in a zone,” he said. “My teammates did a great job of finding me and just encouraging me to stay aggressive.”

He was the sixth different player in the NBA to have 50 or more points in March.

Power forward Marvin Bagley III, acquired at the trade deadline from the Sacramento Kings, added 20 points and 11 rebounds for Detroit. The 6-foot-11, 235-pounder has reached double figures in scoring in 10 of 11 games since coming to the Pistons and is averaging 17 in his past four contests.

“People expected more, and it may take him a little longer to develop.” Detroit coach Dwane Casey said. “It’s probably a lot of factors. But, again, I’m glad he’s here. It’s a great opportunity. This league is about opportunity and taking advantage of it.”

Jerami Grant (knee) missed the game against the Magic but is expected to be ready to face Cleveland.

It might not be the perfect time for Cleveland to play a back-to-back, especially after a hard-fought victory that required an extra five minutes.

Denver took a five-point lead in overtime, but the Cavaliers wouldn’t quit.

“We continued to fight, continued to scrap,” Cleveland coach J.B. Bickerstaff said. “It all came down to heart. Down the stretch, each guy made a key play.”

The coach commended Lauri Markkanen, who had a season-high 31 points and 10 rebounds and defended Nuggets center Nikola Jokic. Markkanen’s 3-pointer with 28.3 seconds left in overtime handed Cleveland a 117-114 advantage it never relinquished.

“We don’t win that game without the performance of Lauri,” Bickerstaff said. “We are no way in this position (without Markkanen).”

The Cavaliers hold a one-game lead over the Toronto Raptors for sixth place in the Eastern Conference, the final spot that goes directly to the postseason and avoids the play-in tournament.