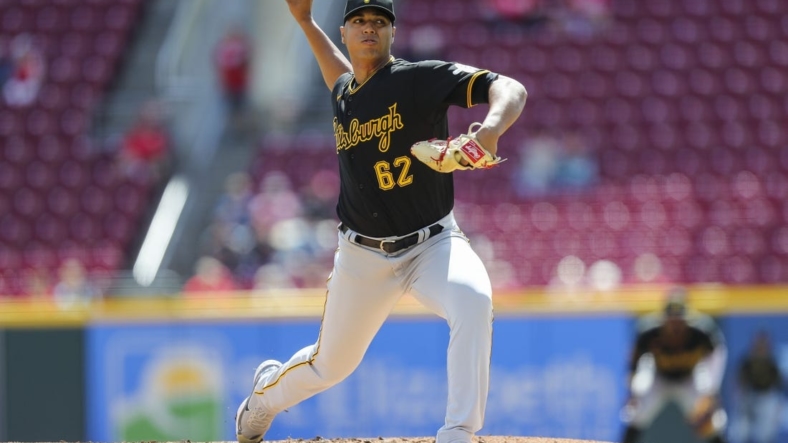 Bryan Reynolds homered in his second straight game and drove in two runs to lead the visiting Pittsburgh Pirates to a 6-1 win over the Cincinnati Reds on Tuesday in the opener of a day-night doubleheader.

Ke’Bryan Hayes and Cal Mitchell also homered for the Pirates, who won their second straight game after losing 16 of 20 games coming into the four-game series. Pittsburgh hadn’t won consecutive games since Aug. 18-19.

TJ Friedl doubled and scored the only run for the Reds, who dropped their fourth straight.

Oviedo (3-2) retired the first eight Cincinnati batters before issuing back-to-back, two-out walks to Austin Romine and Friedl in the third inning. The right-hander didn’t allow a hit until Spencer Steer singled sharply to left field with one out in the fifth.

Reynolds gave the Pirates the lead in the third inning when he singled home Michael Chavis for a 1-0 lead off Cincinnati starter and loser Luis Cessa (3-3).

Reynolds added a solo homer in the fifth against Cessa, who was tagged for five runs on eight hits and three solo home runs over 5 2/3 innings.

It was the second straight game a Reds pitcher gave up three homers in a start. The Pirates have scored six or more runs in back-to-back games for the first time since June 29-30.

Mitchell’s two-run homer to right-center in the sixth put the Pirates ahead 5-0 before Cincinnati finally answered in the bottom of the inning when Kyle Farmer grounded out to third with one out, scoring Friedl.

Jonathan India committed a key baserunning error that killed the momentum of the inning for the Reds. After Friedl opened with a ground-rule double to right-center, India singled to left-center but misread the ball and jogged into second base and was easily tagged out for the first out of the inning.

Cincinnati’s Jake Fraley was hit in the bill of the helmet by a fastball from Pittsburgh reliever Manny Banuelos in the eighth. Fraley went down in a heap and stayed on the ground for several minutes before manager David Bell and trainer Tomas Vera escorted him out of the game.