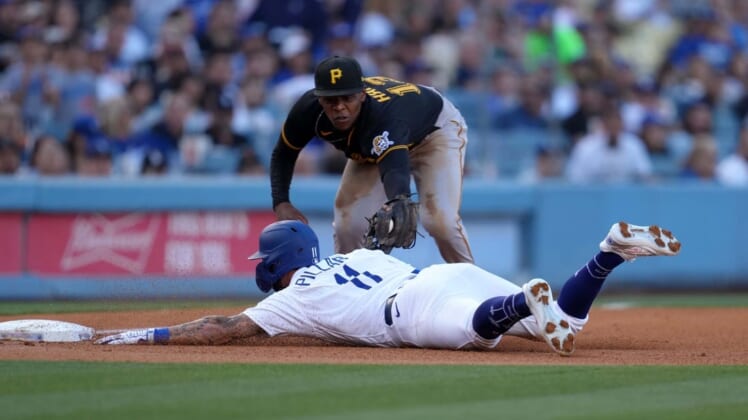 Bryan Reynolds and Rodolfo Castro each hit two-run homers Wednesday to pace the visiting Pittsburgh Pirates to an 8-4 win over the Los Angeles Dodgers and a three-game sweep.

It was Pittsburgh’s first series sweep in Los Angeles since September 2000.

Castro added a two-run single, and Josh VanMeter and Michael Chavis each an RBI single for the Pirates.

Mookie Betts homered and Chris Taylor hit an RBI single for the Dodgers.

Dodgers left fielder Kevin Pillar left after the fifth inning after he apparently was hurt running the bases.

VanMeter left after the top of the sixth because of an injury to his left hand. Castro took over for him at second base.

Pittsburgh took a 1-0 lead in the first. Ke’Bryan Hayes led off with a single to right, and Reynolds walked. An out later, VanMeter’s base hit to center drove in Hayes.

The Dodgers tied it in the fourth. Trea Turner doubled to the corner in left, went to third on Justin Turner’s single to shallow right and scored on Taylor’s single to center.

With two outs in the fifth, the Pirates rallied. Hayes drew a four-pitch walk, and Reynolds followed with his eighth homer, a shot to right field, to put Pittsburgh up 3-1.

In the bottom of the fifth, Los Angeles loaded the bases when Pillar walked, Gavin Lux doubled to right and Mookie Betts got an infield hit. Pillar scored on Freddie Freeman’s groundout, the first out of the inning, to cut it to 3-2.

De Jong relieved Quintana and struck out Trea Turner, then got Justin Turner to pop out to get out of the jam.

The Pirates broke the game open late. In the eighth, Chavis doubled to center and Castro homered to left, his first of the season, to push it to 5-2.

Pittsburgh added three in the ninth on Chavis’ RBI single and Castro’s two-run single, making Betts’ two-run homer, his NL-best 16th of the season, too little, too late in the bottom of the ninth.