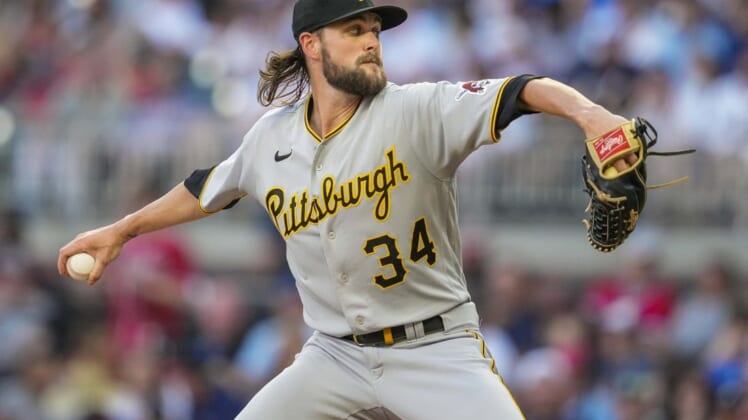 JT Brubaker will seek a breakthrough victory when the slumping Pittsburgh Pirates face the St. Louis Cardinals in a day-night doubleheader on Tuesday.

The right-hander is 0-5 with a 6.75 ERA in six career games (five starts) against the Cardinals.

Bryse Wilson (0-3, 7.53 ERA) will start the nightcap for the Pirates, who took their seventh straight loss on Monday in the opener of the four-game series.

The Cardinals will start rookie left-hander Matthew Liberatore (1-1, 5.54 ERA) in the opener followed by right-hander Miles Mikolas (4-4, 2.93) in the second game.

When Brubaker last opposed the Cardinals, on April 7, he allowed four runs on four hits and three walks in three innings during a 9-0 defeat.

However, he delivered a quality start in his latest outing. He gave up three runs on six hits, two walks and a hit batter in seven innings en route to a 3-1 road loss to the Atlanta Braves on Thursday.

“I felt like I threw the ball well. I felt good,” Brubaker said. “The one thing that sticks out was a hit-by-pitch and a four-pitch walk; can’t defend walks. They put the ball in play and ended up getting those two guys across on free passes.”

Brubaker has allowed three runs or fewer in seven of his past nine starts.

The Cardinals, who have won three of four, will recall Liberatore from Triple-A Memphis to make his fourth big league start in Game 1. He allowed four runs on six hits and three walks over 3 1/3 innings during a 7-5 loss to the Chicago Cubs on June 2 in his latest major league appearance.

“If I’m behind in counts and throwing stuff over the middle of the plate, I get hit,” Liberatore said, according to the St. Louis Post-Dispatch.

The Pirates will bring back Wilson from Triple-A Indianapolis to start Game 2. Wilson is 0-1 with a 15.88 ERA in two starts against the Cardinals this season.

He is 0-2 with a 14.34 career ERA against St. Louis in four outings, including three starts.

The Cardinals will hope for another strong game from Mikolas, who is coming off an impressive performance. He allowed two runs on three hits in eight innings during in a 2-1 road loss to the Tampa Bay Rays on Thursday. He struck out nine and walked none.

“He had five pitches for strikes,” Cardinals manager Oliver Marmol said. “That was a really good version of Miles. That was special.”

The Cardinals have lost five of Mikolas’ starts this season while scoring just four runs in those games.

Mikolas struggled in his most recent matchup with the Pirates, on April 9, when he allowed two runs on six hits and two walks in 3 2/3 innings. He is 4-4 with a 3.12 ERA in 16 career appearances, including 14 starts, against Pittsburgh.

The rebuilding Pirates expected to give outfield prospect Canaan Smith-Njigba his first major league start in one of the games in scorching conditions. The forecasted high in St. Louis on Tuesday is 101 degrees.

“What do they say? Can’t stand the heat, get out of the kitchen?” Smith-Njigba said, according to the Pittsburgh Post-Gazette. “I ain’t worried about that. I’m happy my family will get to come watch me play.”