Pirates look to turn hits into runs vs. Brewers 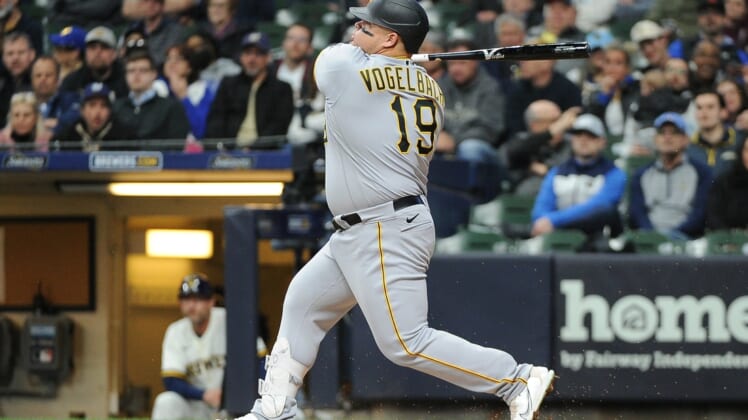 The Pittsburgh Pirates, struggling to come up with key hits, will look to salvage the finale of a three-game series against the Brewers on Wednesday afternoon in Milwaukee.

The Brewers took the first two games of the series despite being outhit each time, thanks to a big inning in each game.

Milwaukee won 5-2 on Tuesday night behind Corbin Burnes, who allowed two runs on solo homers in seven innings while striking out 10. The Brewers got four runs on two hits in the second inning off JT Brubaker with the aid of an error. Rowdy Tellez had a two-run homer and Kolten Wong drove in two unearned runs with a broken-bat, bloop double to shallow right.

“I thought we had some good at-bats, but it just didn’t go our way,” said Daniel Vogelbach, who, along with Josh VanMeter, homered for Pittsburgh. “The good thing about it is, it just counts as one game, so we get a chance to come back (Wednesday).”

In the Brewers’ 6-1 win on Monday, Milwaukee had a five-run fourth keyed by Christian Yelich’s grand slam. In their five losses, the Brewers have been shut out twice and scored one run twice.

“If we hit home runs, it’s going to be OK,” Brewers manager Craig Counsell said of his team’s offense. “We hit their mistakes good (Tuesday), did damage with them, and got a break on Kolten’s ball, obviously.”

In the series finale, Mitch Keller (0-2, 9.39 ERA) will make his third start of the season for Pittsburgh. Fellow right-hander Brandon Woodruff (1-1, 7.27 ERA) makes his third start for Milwaukee.

Keller lost his most recent outing last Friday, 7-2 to the Washington Nationals. He allowed four runs on seven hits in 3 2/3 innings. He also took the loss on April 9 against St. Louis, giving up four runs in four innings on six hits.

Keller didn’t get any run support in his only career outing against the Brewers, giving up two runs on nine hits in 4 1/3 innings in a 6-0 loss last Aug. 14.

Woodruff struggled in his first start, yielding seven runs on six hits in 3 2/3 innings in a 9-0 loss to the Chicago Cubs on April 9. But he bounced back his last time out, allowing just three hits over five scoreless innings in a 5-1 victory over the St. Louis Cardinals on Thursday.

Woodruff is 4-2 with a 4.21 ERA against the Pirates in 10 career games, including eight starts. In his only start against Pittsburgh last season, he allowed two runs on four hits in seven innings in a 7-4 win on June 11.

The Brewers got a big boost in their bullpen Tuesday when Devin Williams pitched a scoreless eighth inning to set up Josh Hader’s fifth save in five opportunities.

Williams, the 2020 National League Reliever of the Year, had struggled in his two previous outings, allowing two runs each time in less than a full inning, with six walks in his first four appearances.

“It’s a step in the right direction,” said Williams, who threw eight of his 11 pitches for strikes on Tuesday. “My mindset was just to get in there and throw strikes. It’s something I’ve been falling behind a lot, so that was my main objective today.”

Milwaukee has held Pittsburgh to two runs or fewer in 22 of 50 meetings since the beginning of the 2019 season, winning 21 of those games. The Brewers are 19-5 at home against Pittsburgh since 2019.