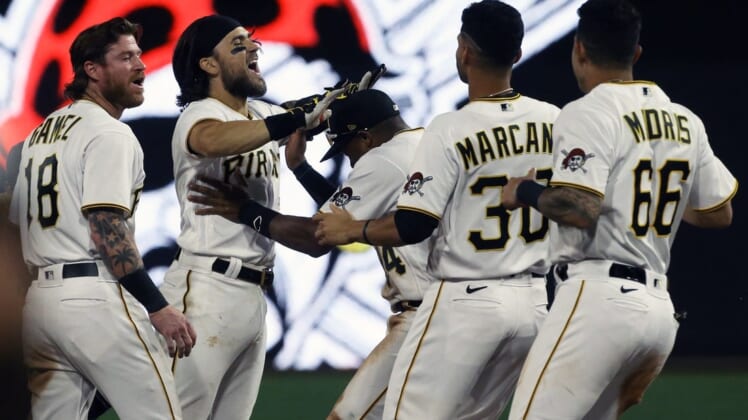 Fresh off a walk-off win on Friday, the Pittsburgh Pirates will look to clinch the series over the visiting Cincinnati Reds on Saturday night.

After the Pirates loaded the bases with one out in a 4-4 game in the ninth on Friday, Michael Chavis delivered a hit down the left-field line to send the fans home happy.

A bucket full of Gatorade over the head was next for Chavis.

“It’s incredible,” he said. “I’m looking out here, seeing so many faces and everything like that. I’m just thrilled that everyone is out here, and that I was able to be a part of it.”

Chavis drilled a 1-0 pitch to score Kevin Newman with the bases loaded.

“It just shows about what we have,” he said. “We have a fun ballclub. They say good ballclubs put themselves in a position to win, and I think that’s what we did.”

Saturday’s game will be the second of the three-game weekend series.

The Pirates’ clubhouse is in high spirits. On Friday before the game, Pittsburgh general manager Ben Cherington said manager Derek Shelton will return for another season in 2023.

“I’m so happy with the level of effort he’s given to help us get better,” Cherington said. “I’m looking forward to this group benefiting from the fruits of his labor.”

Beede made 17 relief appearances for the Pirates this season but has started in his past three. In his most recent start against the Giants on Aug. 13, he surrendered two runs in three innings on three hits and three walks. He struck out three.

Dunn made his Cincinnati debut on Aug. 8 and will make his third start on Saturday. His most recent, on Sunday, didn’t go well. He gave up five runs on seven hits in 3 2/3 innings pitched. The Reds will need him to be much better on Saturday if they are to even the series at one game apiece.

On Friday, the Reds squandered a pair of leads and couldn’t get a win — again — for rookie Graham Ashcraft, who allowed three runs on nine hits and walk in 6 2/3 innings. The Reds now have blown a save four times in his past eight starts.

“He was really efficient,” Bell said. “I thought for a while he might pitch a complete game.”

With the win, the Pirates moved into fourth place in the National League Central, with Cincinnati falling into last place.