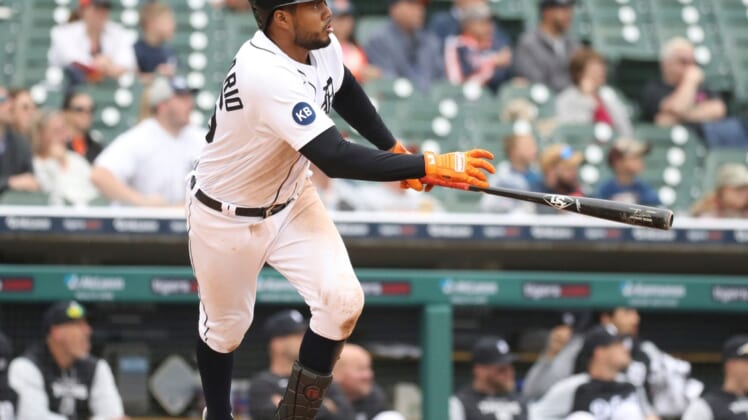 Daniel Vogelbach homered and drove in three runs as the Pittsburgh Pirates salvaged a doubleheader split with a 7-2 win over the host Detroit Tigers on Wednesday.

Detroit scored three unearned in the opener and held on for a 3-2 win.

The Pirates won for just the second time in eight games. Detroit is 2-8 over its last 10 games.

Ben Gamel had three hits, scored two runs and knocked in another in the nightcap. Zach Thompson (1-3) tossed an inning of scoreless relief to get the win. David Bednar recorded a two-inning save.

Robbie Grossman had two hits and an RBI for the Tigers.

The Pirates took a 1-0 lead in the third. Jake Marisnick hit a single and advanced to third on Gamel’s infield hit. Marisnick scored when Bryan Reynolds hit into a double play.

Roberto Perez made it 2-0 in the fourth with a two-out home run to left field.

Detroit tied it in the fifth. Jeimer Candelario led off with a double and scored on Eric Haase’s single. After a fielder’s choice, Grossman ripped a double to left to bring in Derek Hill.

The Pirates drew two walks in the sixth but reliever Drew Hutchison (0-2) escaped the jam when Marisnick lined out.

Hutchison got into more trouble in the seventh. Gamel walked and Reynolds blooped a double to left.

Will Vest entered in relief and threw a wild pitch, allowing Gamel to score. Vogelbach hit a sacrifice fly to bring in Reynolds for a 4-2 lead.

The Tigers had runners on scoring position in the seventh when Miguel Cabrera singled and Austin Meadows doubled. Chris Stratton then struck out Jonathan Schoop.

Pittsburgh tacked on three runs in the ninth against Joe Jimenez. Marisnick walked, stole second and advanced to third on a throwing error. He scored on Gamel’s single and, two outs later, Vogelbach smashed a home run to right.