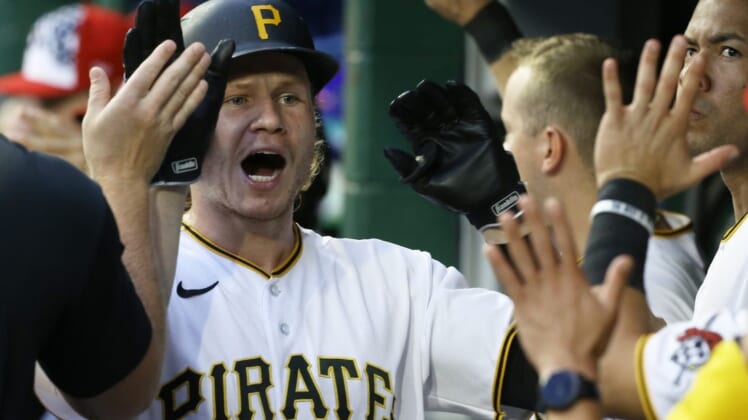 Ben Gamel added an RBI double for the Pirates, who have won four of six.

David Bednar pitched the ninth for his 13th save.

Aaron Judge and Matt Carpenter each hit an RBI single for the Yankees, who have lost two straight.

New York starter Jameson Taillon (9-2), facing his original team for the first time, pitched 5 1/3 innings. He gave up five runs and six hits, with five strikeouts and no walks.

Yankees first baseman Anthony Rizzo was a late lineup scratch because of lower back stiffness.

In the second inning, Vogelbach led off for Pittsburgh with his 11th homer, a shot to right field.

The Pirates pushed it to 4-0 in the fourth. Bryan Reynolds doubled to right ahead of Suwinski’s 14th home run. An out later, Yoshi Tsutsugo, just back from the injured list because of a lumbar muscle strain, singled to center. He was erased on Oneil Cruz’s forceout, but Gamel doubled to right-center to drive in Cruz.

It was Gamel’s first game back off the IL because of a left hamstring strain.

The Yankees got on the scoreboard in the fifth. Isiah Kiner-Falefa doubled to left with one out, went to third on DJ LeMahieu’s groundout and scored on Judge’s base hit to left to make it 4-1.

That ended a 15-inning scoring drought for New York.

In the sixth, Suwinski singled to right and went to third on Vogelbach’s groundout. That chased Taillon for Lucas Luetge. Tsutsugo singled to left, with Suwinski going to third. Cruz’s sacrifice fly to left drove in Suwinski to give the Pirates a 5-1 lead.

The Yankees inched closer in the eighth. Gleyber Torres walked, went to second on Duane Underwood Jr.’s wild pitch, advanced to third on Giancarlo Stanton’s groundout and, after Josh Donaldson popped out, scored on Carpenter’s single to right to make it 5-2.