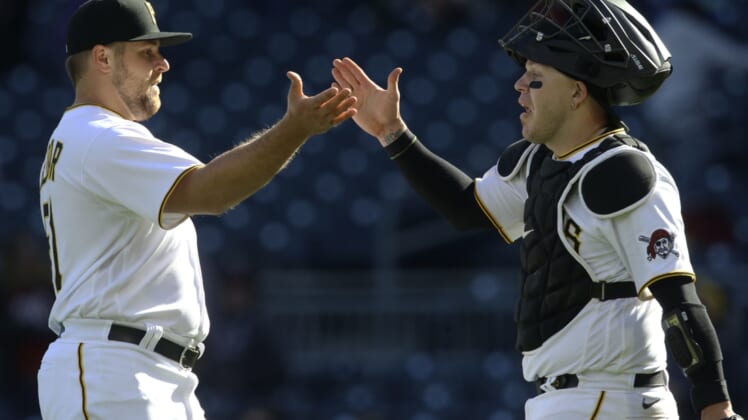 Michael Chavis and Ben Gamel each hit RBI singles Sunday to help the Pittsburgh Pirates come back to down the visiting Washington Nationals 5-3 to win three of four in their series.

Diego Castillo and Yoshi Tsutsugo also had an RBI each for the Pirates, who erased an early three-run deficit.

Heath Hembree (1-0) pitched 1 1/3 scoreless innings, and David Bednar pitched the ninth for his first save.

Victor Robles hit a two-run single, while Riley Adams had an RBI single for the Nationals.

Steve Cishek (0-1) allowed three runs, three hits and a walk in one-third of an inning.

In the second, Washington’s Maikel Franco drew a one-out walk and went to second on Lane Thomas’ single to center. Alcides Escobar also singled, to right, loading the bases. Adams, who was 0-for-6 on the season with four strikeouts, came through with a single to left, driving home Franco for a 1-0 Nationals lead.

Robles, off to an even slower start at 0-for-18 with seven strikeouts, also came through. His base hit to left brought in Thomas and Escobar for a 3-0 lead.

In the sixth, Daniel Vogelbach walked with one out and went to second on Chavis’ single to right. Tsutsugo walked to load the bases and chase Corbin for Victor Arano.

Diego Castillo reached on a fielder’s choice, allowing Vogelbach to score to cut it to 3-1. Gamel followed with an RBI single to left, driving home Chavis to make it 3-2.

The Pirates took the lead in the seventh. Cole Tucker singled to right, Josh VanMeter to left, and Jake Marisnick bunted them to second and third. Cishek intentionally walked Vogelbach. Tucker scored on Cishek’s wild pitch for a 3-3 tie, and Chavis drove in VanMeter for a 4-3 lead.

Sean Doolittle replaced Cishek. Tsutsugo grounded into a double play that was overturned at first on a Pittsburgh challenge, allowing Vogelbach to score for a 5-3 Pittsburgh lead.