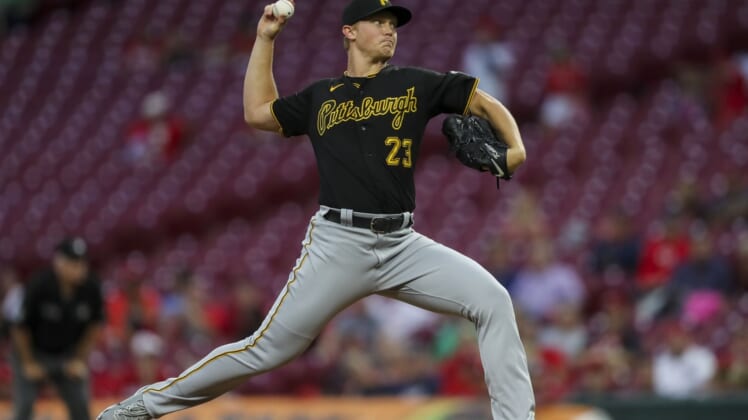 Ke’Bryan Hayes had three hits and Michael Perez snapped an 0-for-20 slump with two hits to help the visiting Pittsburgh Pirates win their first game in Cincinnati in 14 tries with a 6-2 victory Tuesday night.

Perez, the Pirates’ catcher, had been hitless in 20 at-bats and 2-for-53 coming into his sixth-inning at-bat, before an infield single sparked his night.

For the Reds, it was a bad time for their 13-game home winning streak against the Pirates to come to an end. The Reds (78-74) entered the day already three games behind St. Louis for the second National League wild card spot.

Mitch Keller (5-11) earned his first win since Aug. 20 at St. Louis, allowing just two runs while scattering seven singles over 5 2/3 innings. Keller and four relievers combined to hold the Reds 1-for-12 with runners in scoring position.

The Reds jumped out to a 1-0 lead in the second when Tucker Barnhart grounded into a double play, scoring Kyle Farmer, who had singled to open the inning.

The Pirates evened the score in the fourth when Ben Gamel golfed an inside fastball from Mahle two rows deep into the stands in right, just beyond the reach of a leaping Nick Castellanos for his eighth homer.

The Reds loaded the bases with none out in the fourth against Keller. But Keller minimized the damage, with rookie T.J. Friedl accounting for the only run with a one-out sacrifice fly to left, scoring Joey Votto for a 2-1 lead.

The Pirates came right back with two runs against Mahle in the fifth. Hoy Park opened with a single and scored on a one-out single from Hayes to tie the game, 2-2. The Pirates took a 3-2 lead when Cole Tucker singled to center, scoring Hayes.

Mahle (12-6) was tagged for six hits and three runs in 4 1/3 innings, striking out six and walking three.

The Reds had a chance to tie the game with two outs in the sixth. But pinch-hitter Asdrubal Cabrera struck out swinging to fall to 0-for-20 since the Reds signed him in early September.

Facing Pirates reliever Nick Mears in the seventh, the Reds had yet another golden opportunity. Delino DeShields and Jonathan India walked. Max Schrock singled to center to load the bases with none out. But Nick Castellanos fouled out to first. Votto popped out to shallow center and Farmer struck out looking, as the Pirates maintained their one-run lead.