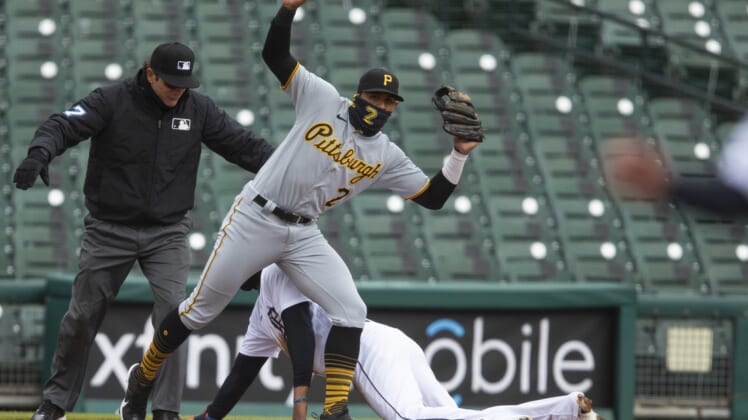 Tyler Alexander won his second straight start and the Pittsburgh Pirates pushed across three fourth-inning runs to edge the host Detroit Tigers 3-2 in the first game of a split doubleheader on Wednesday.

The game was a makeup of a postponement on Tuesday.

Alexander (2-2) pitched five innings, allowing two runs on three hits while striking out seven. Richard Rodriguez got the final three outs in the seven-inning game for his second save.

Bryan Reynolds, Colin Moran and Erik Gonzalez drove in the runs for Pittsburgh, which has won seven of its last 10 games. Adam Frazier and Phillip Evans each had two hits and a run scored.

Anderson struck out the side in the bottom of the first.

Victor Reyes became the game’s first baserunner when he led off the bottom of the third with a double. Zack Short, making his season debut, walked on a 3-2 count. After Reyes stole third, Grossman hit a one-out sacrifice fly to center for the game’s first run.

Pittsburgh took a 3-1 lead in the fourth.

The Pirates opened the inning with three consecutive singles from Frazier, Evans and Reynolds, who knocked in Frazier. Moran’s groundout knocked in Evans. Following a walk and a lineout, Gonzalez’s bloop single to left plated Reynolds.

Detroit got one of the runs back in the bottom of the frame. Wilson Ramos smacked a one-out double and Schoop scored him with a two-out single to center.

The Pirates had two baserunners in the sixth but Skubal retired Gonzalez on a foul out to escape the jam.

Pittsburgh loaded the bases with two out in the seventh but second baseman Willi Castro made a diving stop and threw out Moran to keep it a one-run game.

Detroit went down 1-2-3 against Rodriguez to end the game.