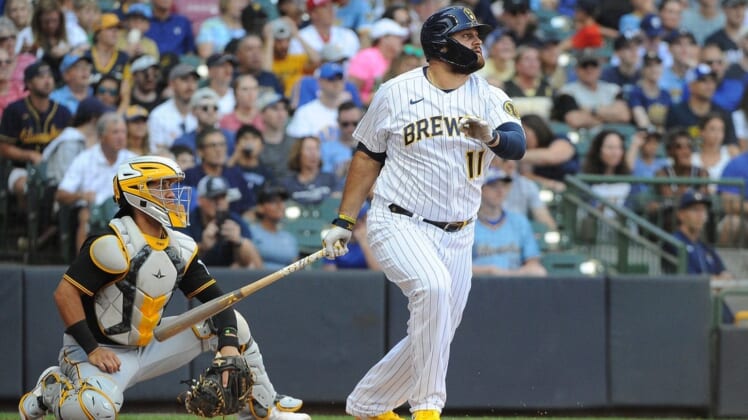 Ben Gamel blasted a two-run homer as part of a four-run seventh that propelled the visiting Pittsburgh Pirates over the Milwaukee Brewers 4-3 on Saturday night to snap a two-game losing skid.

After Pittsburgh recorded just one hit through the first six innings, Yoshi Tsutsugo and Kevin Newman hit back-to-back singles to open the seventh before Oneil Cruz ripped an RBI double to left field.

The rally forced Milwaukee starter Brandon Woodruff out of the game. With Brad Boxberger on the mound, the Pirates pushed across one more run before Gamel’s fourth home run of the season erased a three-run deficit.

Milwaukee responded by putting runners on the corners in the bottom half of the frame with no outs.

Pirates reliever Duane Underwood Jr. buckled down, though. He struck out Andrew McCutchen before getting Kolten Wong to hit a grounder to Tsutsugo at first.

Tsutsugo fired the ball home with no hesitation and Willy Adames was tagged out at the plate. Underwood then fanned Luis Urias to retain the lead.

Chase De Jong (4-0) picked up the win, Boxberger (3-2) suffered the loss and David Bednar notched his 15th save.

Woodruff allowed four hits, three runs, walked three and struck out nine in six innings before failing to record an out in the seventh.

He was perfect through 4 1/3 innings, retiring the first 13 batters he faced in order, six of which were strikeouts.

Milwaukee jumped out to an early lead thanks to Urias’ solo home run in the second inning. It was his 10th of the season.

The Brewers tacked on another run in the bottom of the fifth. Andrew McCutchen laced an RBI single to right field, chasing Pirates starter Zach Thompson from the game.

Thompson allowed two runs on six hits through 4 2/3 innings of work. The right-hander walked three and struck out four.

Eric Stout got the final out of the fifth, but hit Urias to lead off the sixth. After striking out Omar Narvaez, he exited and was replaced by De Jong. Keston Hiura greeted De Jong with an RBI single to cap Milwaukee’s scoring.