Pirates down Marlins for first 4-game win streak since ’19 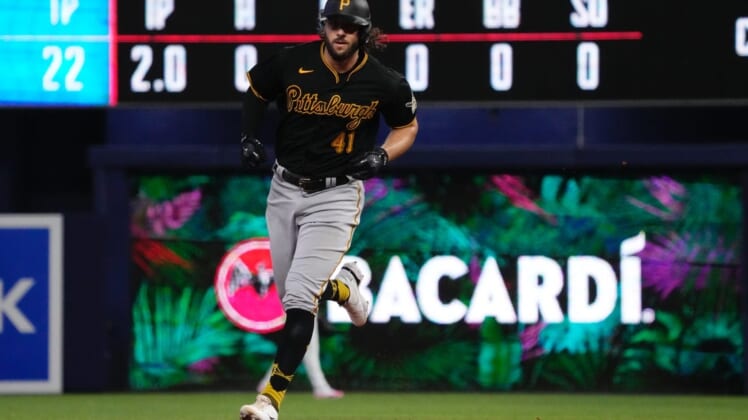 Jake Marisnick homered for the second straight night to help the Pittsburgh Pirates notch a 3-2 victory over the host Miami Marlins on Tuesday night.

Oneil Cruz added a run-scoring triple and Diego Castillo had two hits as Pittsburgh beat the Marlins for the second consecutive game. The Pirates also have won a season-best four games, their best streak since also winning four straight from Sept. 24-27, 2019.

Brian Anderson and Nick Fortes each had two hits for the Marlins, who have lost five of their past seven games.

Miami’s Garrett Cooper departed after six innings due to a left knee injury. Cooper, added to the National League All-Star team earlier in the day, fouled a pitch from Pittsburgh’s Tyler Beede off the knee during a sixth-inning at-bat.

Beede retired all six batters he faced in the sixth and seventh innings, and Wil Crowe followed with a perfect eighth.

All-Star David Bednar worked the ninth for his 16th save in 19 opportunities. Jesus Aguilar reached on a check-swing single to right with two outs and pinch runner Luke Williams stole second before Bednar struck out Bryan De La Cruz to end it.

Miami’s Daniel Castano (1-3) allowed three runs and five hits over five innings. He struck out three and walked none.

Marisnick led off the third with a 397-foot homer to left. It was his second blast of the season, both since he returned to action Monday following a two-month stint on the injured list.

Miami tied the game in the bottom of the inning as Joey Wendle’s sacrifice fly to center scored Anderson.

Pittsburgh moved ahead in the fifth when Cruz ripped a two-out triple to right to score Castillo. Jason Delay followed with a single to left-center to give the Pirates a 3-1 edge.

The Marlins pushed across a run in the bottom of the fifth, and it was set by Miguel Rojas’ steal of second with two outs. Fortes followed with a sharp single to left to drive in Rojas.