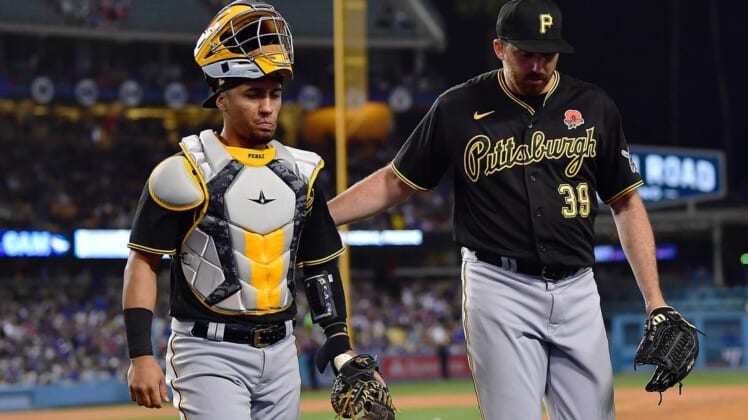 Tucupita Marcano hit his first career home run and Bryan Reynolds also went deep as the visiting Pittsburgh Pirates blew an early lead then rallied in the ninth inning for a 6-5 victory Monday over the Los Angeles Dodgers.

Michael Perez had a game-tying RBI single in the ninth inning for Pittsburgh, with pinch-runner Michael Chavis scoring the go-ahead run from second base on a fielding error by Dodgers first baseman Freddie Freeman on a ground ball from Cal Mitchell.

David Bednar (2-1) blew a save attempt for the first time in 10 chances, but picked up the victory after giving up two runs on four hits in the eighth inning as the Dodgers took a late 5-4 lead. Bednar pitched a scoreless ninth, throwing 50 total pitches.

Hanser Alberto and Mookie Betts hit back-to-back home runs for the Dodgers, while Edwin Rios also went deep. The Dodgers tied the game in the eighth inning on an RBI double from Justin Turner and had a go-ahead bloop single from Chris Taylor.

Dodgers closer Craig Kimbrel (0-1) blew his first save attempt in 11 chances, while giving up two runs (one earned) in the ninth.

The Pirates beat the Dodgers for the third time in four games this season and ended their 12-game losing streak at Dodger Stadium.

Josh VanMeter walked and Jack Suwinski singled for the Pirates to open the second inning before Marcano ripped a three-run home run to right-center field off Dodgers starter Walker Buehler, his first in 30 career games over the past two seasons.

The Pirates made it 4-0 in the third inning on Reynolds’ home run to right-center, his seventh.

Alberto hit a two-out home run in the fifth, his first in a Dodgers uniform, and Betts followed with another three pitches later, his 15th of the season and 12th this month to tie Roy Campanella for most in May in club history.

The Dodgers pulled within a run at 4-3 in the sixth inning when Edwin Rios hit a home run off left-hander Dillon Peters, his seventh of the season.