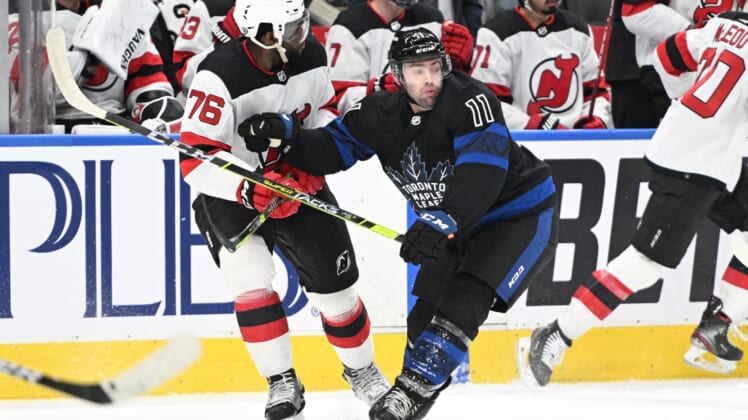 Pierre Engvall scored the go-ahead, short-handed goal at 15:18 of the third period and the Toronto Maple Leafs defeated the visiting New Jersey Devils 3-2 on Wednesday night.

Ilya Mikheyev also had a short-handed goal for Toronto. Mitchell Marner had the other goal.

Nico Hischier had a goal and an assist for the Devils. Damon Severson added a goal in the l.

Petr Mrazek, who cleared waivers on Monday, made 20 saves for Toronto.

Nico Daws, playing for the second night in a row, stopped 28 shots for New Jersey. He played Tuesday night in a 7-4 win over the New York Rangers.

Toronto has won all three meetings between the teams this season.

Toronto had an 11-3 advantage in shots on goal in the first period, but Daws was solid in a scoreless opening 20 minutes. Nathan Bastian had two of New Jersey’s shots.

Toronto received the first power play of the game when Kevin Bahl was called for slashing at 1:42 of the second period. Toronto did not have a shot on goal during the two minutes, however.

The Devils took advantage of their first power play with Severson’s ninth goal of the season at 5:03 of the second. Severson’s shot was deflected by Toronto defenseman Ilya Lyubushkin. Jesper Bratt and Hischier earned the assists on the goal set up by Engvall’s tripping penalty.

Toronto tied the game on Mikheyev’s short-handed goal at 12:30 of the second period. Mikheyev completed a rush by switching to his backhand to score his 13th goal of the season from close in.

Hischier scored his 18th goal this season 13:56 of the second, jamming in a rebound off Jack Hughes’ shot.

Marner responded with his career-best 27th goal of the season at 14:54 of the second, converting a skilled saucer pass from Auston Matthews.

Toronto led 22-14 in shots on goal after two periods.

New Jersey went on the power play at 12:23 of the third period when Mikheyev was assessed a double-minor high-sticking penalty.

It backfired when Engvall scored his 11th goal of the season on a 2-on-1 to provide the final difference.