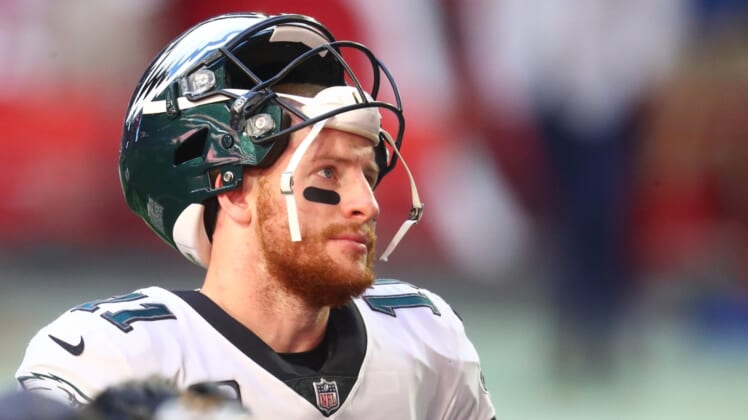 Multiple teams have checked in with the Philadelphia Eagles about potential trades for quarterback Carson Wentz, NFL Network reported Thursday.

The Eagles are in no hurry to deal their former starter, “but they did field the calls and discussed the issue,” per the report.

Interest in the 28-year-old Wentz has reportedly intensified since Matthew Stafford’s recent removal from the NFL trade block, with the former Detroit Lions quarterback on his way to the Los Angeles Rams in exchange for Jared Goff plus two future first-round picks and a third-rounder.

Wentz and his agents have not formally requested a trade, according to the report.

Big contract for a benched QB

He signed a four-year, $128 million extension in June 2019, but played poorly in 2020 and was benched by former head coach Doug Pederson in favor of second-round rookie Jalen Hurts.

Wentz completed just 57.4 percent of his pass attempts (251 of 437) for 2,620 yards and 16 touchdowns. He threw a league-leading 15 interceptions (tied with Denver’s Drew Lock) in 12 starts while averaging a career-low 218.3 passing yards per game. He also ran for five touchdowns.

At his introductory press conference last month, new head coach Nick Sirianni was asked about the QB controversy he inherited.

“We have two quarterbacks in Carson Wentz and Jalen Hurts that are top notch quarterbacks,” he said. “A lot of teams don’t have any, and so I’m really excited to work with both of them.”