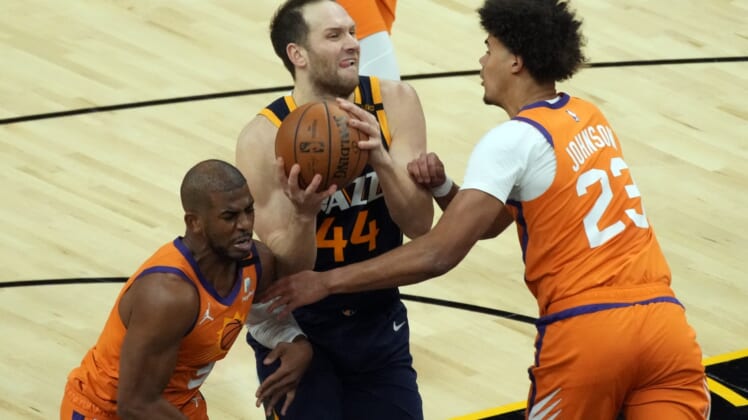 Two days after earning their first playoff appearance in 11 years, the Phoenix Suns claimed a share of the best record in the NBA on Friday with a 121-100 win over the visiting Utah Jazz.

Devin Booker led the way with 31 points as Phoenix dominated Utah in an outcome that resulted in both teams leaving with 45-18 records.

This was the Suns’ third win over the Jazz in as many games this season, giving them the tiebreaker if they end up tied going into the playoffs.

The matchup of the two top teams in the NBA went about as well as you’d expect considering the home team was mostly at full strength and the visitors were missing two All-Star guards.

Mikal Bridges scored 18 points, while Chris Paul (12 points, nine assists) and Deandre Ayton (11 points, nine rebounds) each had strong showings in limited action as the Suns won their third game in a row.

Bojan Bogdanovic led Utah with 22 points, but only three other players scored in double figures as the short-handed and slumping Jazz fell for the third time in four games.

The game was only close for half of the first quarter. Bogdanovic scored to make it 19-16 in Phoenix’s favor with 5:55 remaining in the quarter, when Ayton and Booker teamed up for an 8-0 Suns run.

Phoenix ended up outscoring Utah 39-23 in the quarter and never looked back.

The Suns led by as many as 26, taking their largest lead at 96-70 late in the third quarter after a Booker jumper. The Suns star scored 15 points in that quarter.

The Jazz had the NBA’s best record by themselves since Feb. 2. They still have nine games remaining in the season, including a home matchup against Toronto on Saturday night that starts a five-game homestand in Salt Lake City.

The Suns begin a three-game road trip at Oklahoma City on Sunday. Phoenix plays seven of its final nine games on the road.