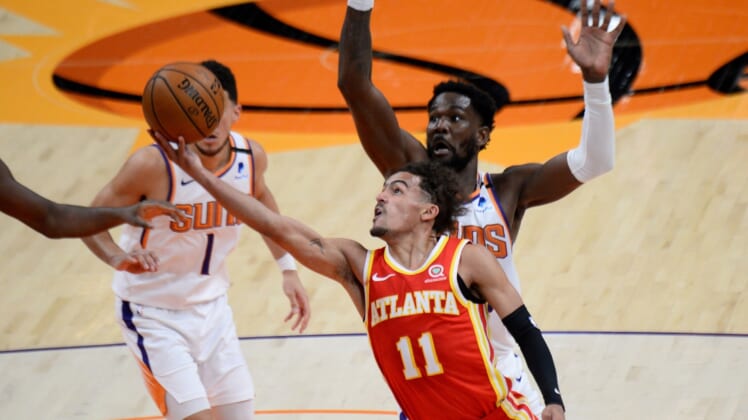 Crowder scored 19 points and made five 3-pointers to prevent the Suns from blowing a 16-point advantage. The game was tied 105-105 with three minutes remaining before the Suns outscored the Hawks 12-5 the rest of the way, with Crowder’s 3-pointer and free throw the clinching points.

Devin Booker led Phoenix with 21 points, and Dario Saric came off the bench to score 20 points, ending an eight-game stretch in which he was limited to single digits. Deandre Ayton had 13 points, including the go-ahead bucket with 2:06 left, and 14 rebounds.

Atlanta was led by Bogdan Bogdanovic with 22 points and Trae Young with 19 points and 13 assists. Clint Capela had 16 points and 16 rebounds.

The Hawks played the second half without forward John Collins, who had nine points and four rebounds before spraining his left ankle and leaving with 1:08 left in the first half. Collins stepped on Capela’s foot as he was grabbing a rebound.

Despite the absence of Collins and with Young on the bench with four fouls, the Hawks pecked away at the deficit. They trailed 89-85 after three quarters but tied the game at 103-103 on a pair of free throws by Young with 3:31 left.

Phoenix continues its three-game homestand on Wednesday against Chicago. Atlanta plays the seventh game of its eight-game road trip on Thursday at San Antonio.