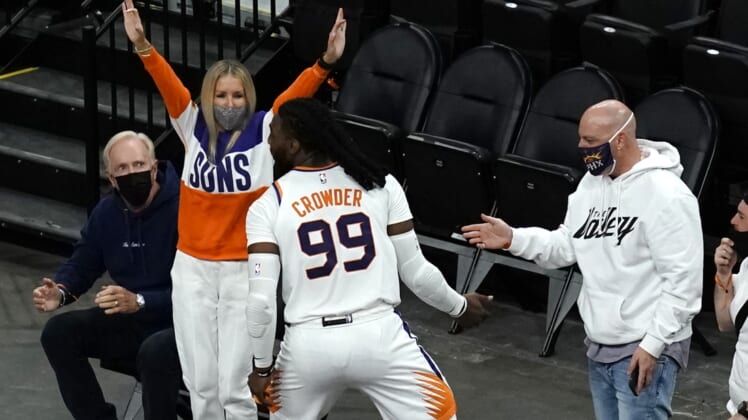 Jae Crowder made a career-high eight 3-pointers, fueling the Phoenix Suns’ franchise-record 25 made shots beyond the arc, in a 126-120 win over the visiting Houston Rockets on Monday night.

Phoenix topped the previous record of 24 3-pointers set on Feb. 20, when the Suns

Nine Phoenix players made at least one 3-pointer Monday. Crowder, who was 8 of 9 from long range in the first half, finished 8 of 12 before fouling out with 44 seconds left in the fourth quarter.

Suns guard Devin Booker had 24 points, seven rebounds and seven assists. Deandre Ayton finished with 18 points on 9-of-13 shooting from the field and pulled down eight rebounds.

The Rockets have lost eight of their last nine games while Phoenix has won nine of its past 10 games.

Phoenix made 12 of 16 from 3-point range in the second quarter, include 5 of 5 from Crowder.

Phoenix’s 18 shots made from 3-point range in the first half tied the NBA record.

The Suns built an 81-58 halftime lead behind their 18-of-24 shooting from beyond the arc.

Cameron Johnson and Booker each made a 3-pointer to build the lead to 97-82 with 3:33 remaining in the quarter.

Ayton responded with two baskets in the paint and Booker scored on a fastbreak layup to push the Suns’ lead to 120-109 with 4:20 remaining.

Houston did not come closer than six points afterward.