Phoenix Suns favored but action split as series vs. Denver Nuggets tips off 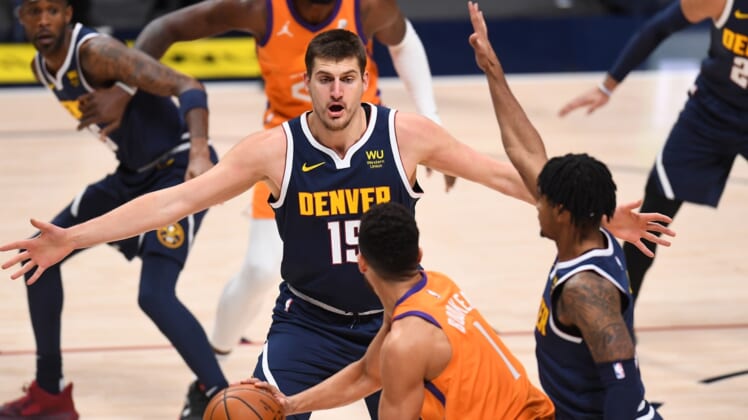 The second-seeded Suns are favored as they play host to Game 1 after closing out the defending champion Los Angeles Lakers in dominating fashion. The third-seeded Nuggets are also coming off a six-game opening series in which they eliminated the Portland Trail Blazers.

Phoenix is the -180 favorite to win the series at PointsBet, but the sportsbook has seen two-way action on the series. The public has backed the Suns with 76 percent of the series handle, while 61 percent of the totals bets have been placed on the Nuggets.

The action has been more one-sided at DraftKings, where the Suns are 5.0-point favorites in Game 1 and have been backed by 64 percent of the bets and 61 percent of the handle.

Phoenix won Game 5 of the Lakers series by 30 points and led the closing game by as many as 29 while finishing the series in dominating fashion.

“It certainly is cool to beat the defending champs, for sure,” Suns coach Monty Williams said. “But you can only hold onto that for so long, and now you have to move towards another worthy opponent.”

“I was just locked in, to be completely honest,” Booker said after Phoenix won its first playoff series since 2010. “We wanted to end it on their home court.”

Jokic and the Nuggets appeared headed toward a Game 7 with the Trail Blazers when they trailed by 14 points in the third quarter of Game 6.

But Denver revved up its attack, and Portland wilted under the pressure. The Nuggets outscored the Trail Blazers 47-22 over the final 16 minutes, 53 seconds to record a 126-115 victory.

“Nobody can take the fight out of us,” Jokic said. “We will just go out there and fight and that’s what we have been doing. We’re never going to quit. Quit is not in our vocabulary.”