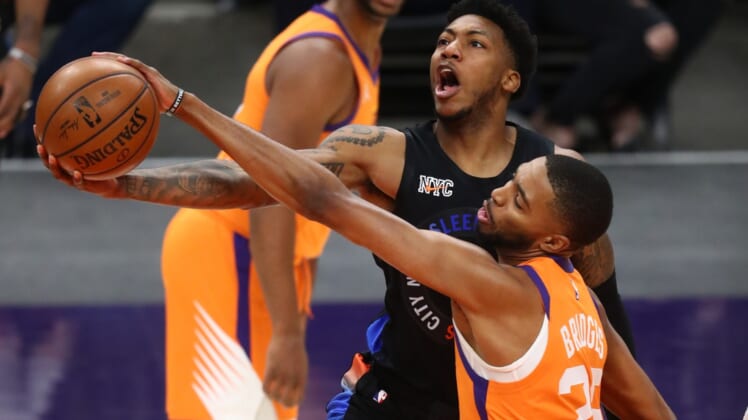 Jae Crowder had a strong return after missing eight consecutive games with an ankle injury by making six 3-pointers and finishing with 18 points in the Phoenix Suns’ 128-105 win over the visiting New York Knicks on Friday night.

The game was contentious between teams jockeying for playoff position with the regular season winding down.

The Knicks’ Taj Gibson was whistled for a flagrant foul for elbowing Paul in the open court, and Julius Randle was assessed a technical foul on a hard foul of Crowder in the fourth quarter.

Phoenix (48-19) remains one game behind Utah (49-17) in the Western Conference standings with only five games remaining.

Mikal Bridges and Devin Booker each had 16 points, and reserves Cameron Payne (15 points) and Frank Kaminsky (10) were also productive for the Suns.

Phoenix outscored New York 23-5 between the third and fourth quarters to take control of the game.

Two 3-pointers by Crowder and another by Bridges contributed to an 11-0 run in that stretch.

Phoenix led by as many as 13 points in the first quarter, but the Knicks outscored the Suns 25-6 in one stretch to take a 63-56 halftime lead.

After the Knicks took a 10-point lead early in the third quarter, Phoenix cut the lead to two on three occasions but could not take the lead until a flurry of activity to end the period.

Following a Kaminsky layup and a Payne 3-pointer, Phoenix’s Torrey Craig made a tip-in to tie the game at 88 with 2.2 seconds left in the quarter.

An errant inbound pass by Barrett went to Payne, who made a layup at the buzzer.