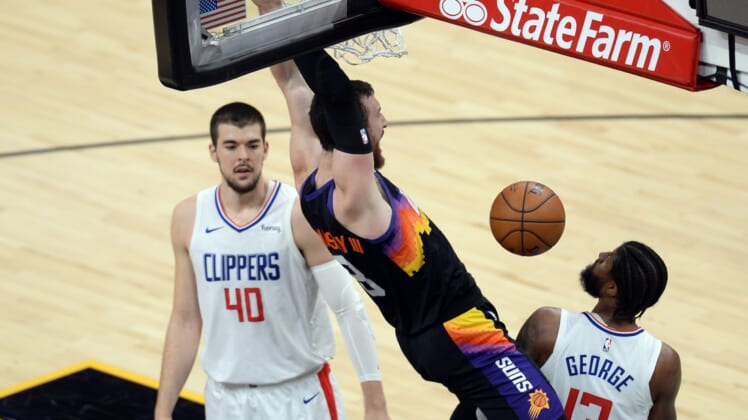 The Phoenix Suns clinched their first playoff berth since the 2009-10 season with a 109-101 win over the visiting Los Angeles Clippers on Wednesday.

Chris Paul scored 15 of his 28 points in the fourth quarter to lead the Suns, who improved to 1-2 this season against the Clippers. Paul also had 10 assists and three steals.

Phoenix (44-18) is now two games ahead of the Clippers (43-21) for second place in the Western Conference. The Utah Jazz (45-17) lead the conference standings by a game over the Suns.

Paul George had 25 points and 10 rebounds for Los Angeles, and Marcus Morris Sr. added 16 points. Ivica Zubac finished with 14 points, Terance Mann had 10 and Reggie Jackson wound up with 10.

George had 39 points in the first meeting with the Suns this season and 33 in the second while combining to shoot 27 of 43 from the field, including 14 of 19 from 3-point range. On Wednesday night, George, who is battling ankle soreness, made 9 of 21 shots from the field and 3 of 9 from beyond the arc.

The Clippers were without Kawhi Leonard (foot) for the fifth straight game. Newly signed DeMarcus Cousins also did not play.

Jae Crowder and Dario Saric sat out for the Suns because of ankle injuries.

The Suns never trailed in the game and led by as many as 14 points in the first half and 13 in the third quarter.

Los Angeles got within four on a layup by Rajon Rondo with 32.4 seconds left in the third, but Payne answered with jumper to increase the margin to 86-80 going into the fourth quarter.

The Clippers drew within 93-92 on another Rondo layup with 6:08 left, but three consecutive baskets by Paul turned the tide. His layup with 4:42 left gave Phoenix a 99-92 edge.

After Zubac made a dunk to cut the deficit to five, Paul answered with another jump shot.

Phoenix’s Cameron Johnson and Deandre Ayton each grabbed offensive rebounds on a possession that ended with two free throws by Bridges, pushing the Suns’ lead to 107-98 with 50.1 seconds left.