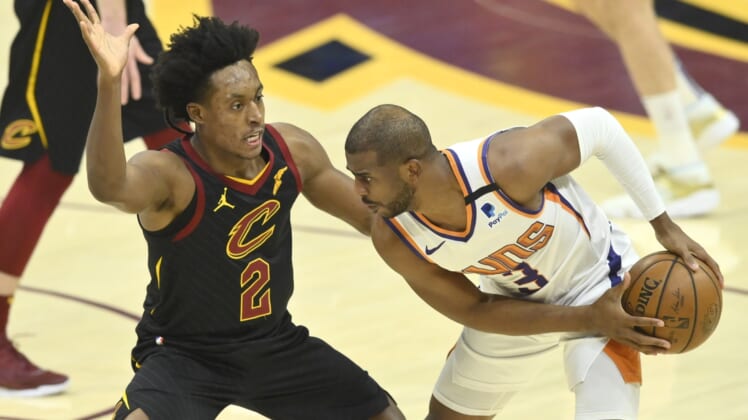 Devin Booker’s 31 points and Chris Paul’s 23 points and 16 assists helped the Phoenix Suns hold off the host Cleveland Cavaliers for a 134-118 overtime victory on Tuesday night.

Booker shot 14-for-27 from the field and also had six rebounds and five assists as the Suns (47-18) moved back into a tie with the Utah Jazz for the top spot in the Western Conference with their fifth consecutive victory.

After failing to pull away throughout regulation, Phoenix opened overtime with a 15-0 run fueled by eight points from Mikal Bridges, who totaled 22 points to go with five rebounds, four assists and three steals.

The Suns, who scored 23 points off 17 Cleveland turnovers, clamped down defensively in overtime as they allowed only four points and held the Cavaliers without a field goal for three and a half minutes.

Okoro and Booker dueled down the stretch of regulation. Okoro tied the game twice in the final minute.

Booker had a chance to win it at the buzzer; but, after dribbling his way into the far corner and drawing a double-team, his contested 3-pointer was an air ball, sending the game to overtime.

Okoro scored 11 points in the fourth quarter but was shut out in overtime.