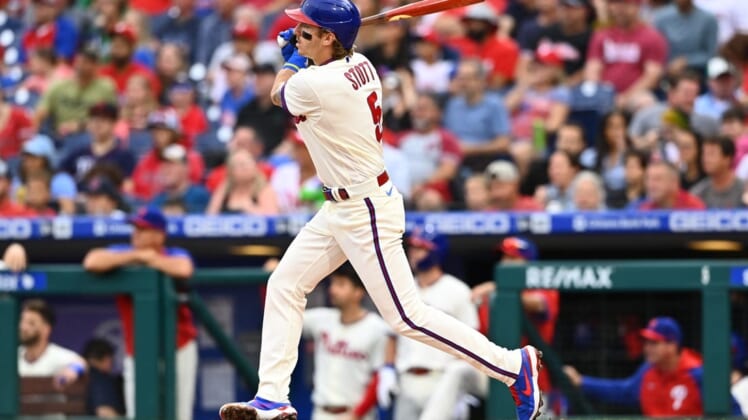 Zack Wheeler scattered two hits over six innings Saturday as the host Philadelphia Phillies defeated the Arizona Diamondbacks 4-0 for their ninth win in a row.

The nine-game winning streak is the longest for the Phillies since 2011, the last year the franchise made the playoffs.

Philadelphia’s Bryson Stott belted a two-run shot in the second inning for his fourth home run in the last eight games. Nick Castellanos had an RBI single in the first inning and an RBI double in the eighth for the Phillies, who improved to 8-0 under interim manager Rob Thomson.

David Peralta and Alek Thomas each had two hits for the Diamondbacks, who have lost six of their last eight games.

Wheeler (5-3), who was reinstated from the paternity list prior to the series opener, struck out eight batters Saturday, exiting after 98 pitches. He has allowed just 10 runs while posting a 5-0 record over his last eight outings.

Jeurys Familia relieved Wheeler to start the seventh inning and retired the first two batters before loading the bases. Andrew Bellatti relieved Familia and induced Ketel Marte to fly out to end the inning.

Brad Hand retired the side in order in the eighth inning to bridge the gap to Cristopher Sanchez, who got the final three outs to end the game.

With one out in the first inning, Rhys Hoskins ripped a double off Madison Bumgarner (2-6) and advanced to third on Bryce Harper’s groundout. Hoskins was able to trot home after Castellanos muscled a pitch into left field for an RBI single.

Stott extended the Phillies’ advantage to 3-0 in the second inning by depositing a 2-2 curveball from Bumgarner into the right-field bleachers.

Philadelphia tacked on an insurance run in the eighth inning. Harper singled to lead off the inning and ran through a stop sign to score on Castellanos’ check-swing double down the first-base line.