Phils look to bounce back after rough loss to Giants 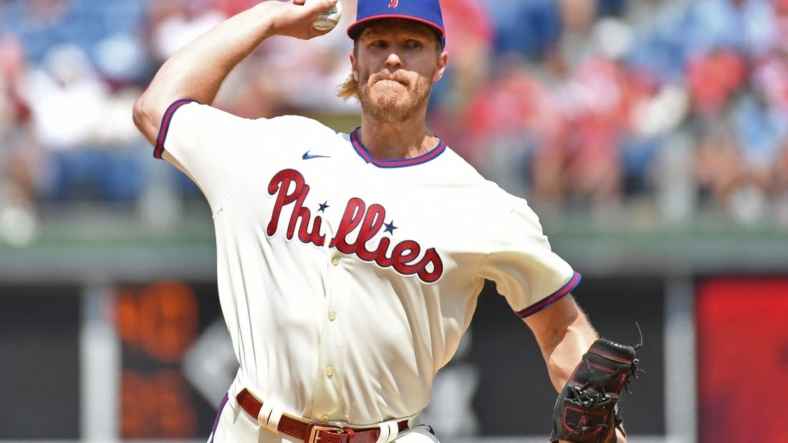 Less than 24 hours after each team finished a game with a position player on the mound, the Philadelphia Phillies and host San Francisco Giants will hand the ball to right-handers Noah Syndergaard and Jakob Junis, respectively, in the continuation of a three-game series Saturday afternoon.

The opener turned into a save-the-bullpen affair within three innings Friday, with Joc Pederson bombing a three-run home run into the San Francisco Bay among five RBIs as the Giants ran off to an 11-0 lead.

It was 12-0 headed to the last of the eighth when Phillies manager Rob Thomson turned to backup catcher Garrett Stubbs to mop up for the third time this season. The Giants scored once on a Luis Gonzalez triple and Andrew Knapp’s run-scoring infield out.

Gonzalez, who started the game in right field, then got his fifth shot at pitching in the top of the ninth. He lost a shutout when Nick Maton doubled and scored on Alec Bohm’s RBI single.

Phillies star Bryce Harper appeared none too pleased with the Giants’ tactics when he came up to face Gonzalez with one out. Instead of taking a shot at the water beyond the right-field fence, he bunted back to the pitcher for an out.

It ended an 0-for-4 night for Harper in just his seventh game since returning from a thumb injury. Three hits, like he had Wednesday against Arizona, or no hits, outfielder Matt Vierling insisted having Harper back makes the Phillies a better team throughout the lineup.

“He’s been so good with the young guys,” the 25-year-old insisted. “Seeing that keeps you accountable, but also if you need someone to lean on, you have him.”

While the ending of the game might have ruffled some feathers, neither team can afford to take the eye off the prize Saturday.

The Phillies (73-59) are dueling the San Diego Padres (74-59) for the second National League wild-card playoff spot. The Giants (62-68) also remain in the hunt for one of the league’s three wild cards, but they trail the Phillies by 10 games with just 32 remaining.

Syndergaard (8-9, 3.98 ERA) will get an opportunity to demonstrate just how pleased he and his teammates were with Giants manager Gabe Kapler when he makes his eighth regular-season career start against San Francisco in the rematch. The right-hander has gone 3-2 with a 2.79 ERA in the first seven.

Syndergaard has never lost in San Francisco, going 2-0 with a 0.75 ERA in three starts, all for the New York Mets. He’s also faced the Giants in the playoffs while with the Mets, throwing seven shutout innings in a 3-0 home loss to Madison Bumgarner and the Giants in the 2016 National League wild-card game.

One guy Syndergaard might have to deal with is Giants newcomer Lewis Brinson, who contributed a single to Friday’s romp in his first at-bat since getting promoted from Triple-A.

“I like to have a good time,” Brinson insisted before Friday’s laugher. “I’m going to help this team win as much as I can.”