Phillies use the long ball to overcome Brewers 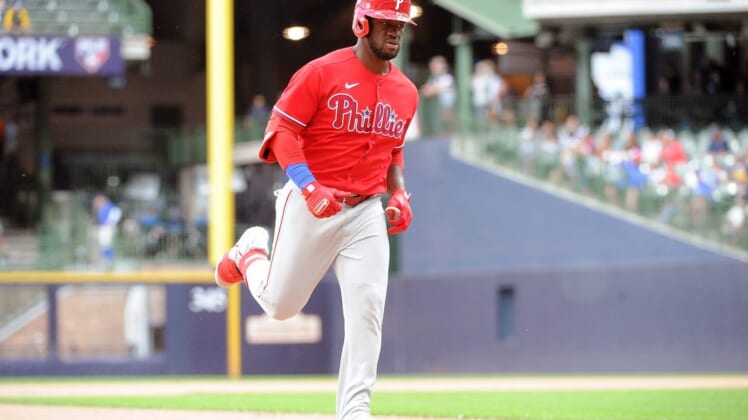 Kyle Schwarber and Odubel Herrera each belted a two-run home run and Bryce Harper had a solo shot to propel the visiting Philadelphia Phillies to an 8-3 victory over the Milwaukee Brewers on Thursday afternoon.

Didi Gregorius had an RBI double among his three hits to help the Phillies complete a three-game sweep. Philadelphia has scored 53 runs during its season-high seven-game winning streak.

Willy Adames and Hunter Renfroe each belted a solo homer and former Phillie Andrew McCutchen added an RBI single for the Brewers, who have been outscored 38-9 during their six-game losing skid.

Philadelphia scored twice in the fifth inning to take a 3-1 lead.

Schwarber struck out to begin the inning but reached first base on a passed ball by Victor Caratini. Schwarber advanced to third on singles by Rhys Hoskins and Nick Castellanos before coming home on J.T. Realmuto’s sacrifice fly to left field.

Hoskins, in turn, came home after Gregorius’ check swing produced a double down the left-field line.

Renfroe deposited a first-pitch cutter from Connor Brogdon over the wall in center field to lead off the sixth inning. However, Harper answered with his own power display to start the seventh. Harper sent a 1-2 fastball from Brad Boxberger off the scoreboard in center for his team co-leading 15th homer of the season and fifth in his last six games.

The Phillies pushed their lead to 6-2 in the eighth inning after Mickey Moniak walked and Schwarber brought him home with a homer to right-center field. The homer was also Schwarber’s 15th of the season.

Philadelphia tacked on two more runs as Harper singled and Herrera reached the second deck in right field for his fifth homer of the season.

Seranthony Dominguez (3-1) struck out two batters in one scoreless inning to pick up the win.