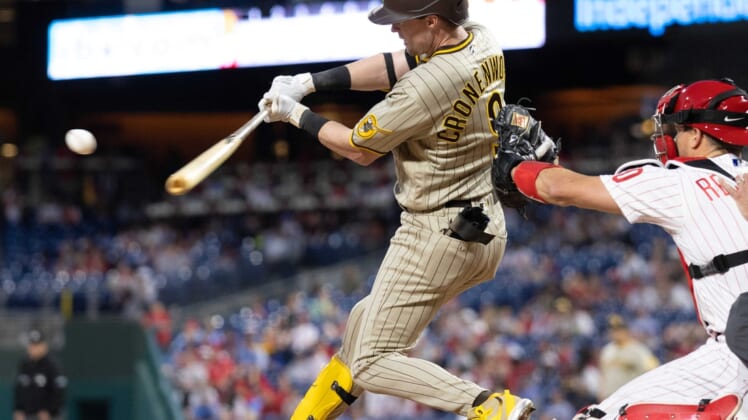 The Philadelphia Phillies won five of seven games on a difficult West Coast trip at the Seattle Mariners and Los Angeles Dodgers.

After a day off, the Phillies fell flat in a 3-0 loss to the San Diego Padres on Tuesday.

The Phillies will aim to bounce back from a two-game losing streak when they host the Padres again on Wednesday evening.

“We didn’t necessarily swing the bats great,” Phillies manager Joe Girardi said after his team produced only five hits. “I just think it was one of those nights.”

Kyle Schwarber especially struggled, going 0-for-4 and striking out all four times.

“He’s missing his pitches when he gets them,” Girardi said.

It’s unclear whether reigning Most Valuable Player Bryce Harper will be back in the lineup on Wednesday. Harper sat out Sunday at Los Angeles after receiving a PRP injection in his right elbow and then missed Tuesday’s game.

In Wheeler’s last start Thursday against the Dodgers, he gave up six hits and three runs in 5 1/3 innings after being reinstated from the COVID-19 injured list.

The Padres will look to maintain their momentum and extend their winning streak to three.

San Diego left-hander Blake Snell is expected to make his first start of the season after being sidelined with an adductor and elbow injury. Snell, who has been on the injured list since April 15, is stoked for his turn in the rotation.

“It’s been a long time,” Snell said over the weekend in Atlanta. “A month and a half ago I thought I was gonna be down for like three days. That’s what I remember. I was like, ‘It should be a couple of days. I’ll be good.'”

Snell is 0-1 with a 3.00 ERA in two career starts against the Phillies.

On Tuesday, Padres starter Mike Clevinger picked up his first win of the season with five scoreless innings after starting the season on the injured list.

The Padres also received tremendous support from the bullpen as MacKenzie Gore threw three scoreless innings in his first relief appearance. Taylor Rogers then completed the ninth for his 14th save in 15 chances.

“I think the ceiling is super high for everyone involved,” Clevinger said.

Offensively, Robinson Cano contributed a pair of hits and Trent Grisham continued his hot hitting with a clutch RBI double as the Padres moved 10 games above .500 with manager Bob Melvin recovering from prostate surgery.

Ryan Christenson will keep serving as the interim manager until Melvin returns.