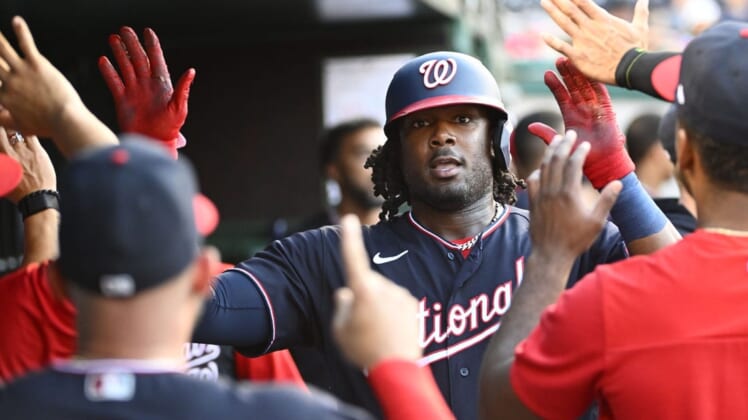 J.T. Realmuto’s two-run single with one out in the 10th inning gave the visiting Philadelphia Phillies an 8-7 victory and a sweep of the Washington Nationals in Friday’s day-night doubleheader.

Matt Vierling’s second home run of the game broke a ninth-inning tie for the Phillies, before the Nationals forced the extra frame.

Vierling’s third home run of the season came with one out against Tanner Rainey, helping the Phillies post their 14th win in their last 16 games.

Jose Alvarado (1-1), the eventual winning pitcher, needed one out in the bottom of the ninth to close the game, but he walked Juan Soto, and then Nelson Cruz reached on a throwing error by shortstop Didi Gregorius as the Nationals tied the game.

Josh Bell homered twice for the Nationals, but they lost their seventh game in a row. Washington scored in the 10th on Ehire Adrianza’s two-out double, but he was stranded to end the game.

The Phillies won 5-3 in the day’s first game. Bell also homered in that game.

Bell opened the scoring in the nightcap with a home run in the second inning. Vierling matched it in the third, and the Phillies tacked on two more runs in the third before Bell’s two-run shot pulled the Nationals even in the fourth.

Washington went up 5-3 on Maikel Franco’s sacrifice fly and Luis Garcia’s double in the sixth.

Philadelphia produced its runs on seven total hits. Vierling was the team’s only player with more than one hit.

The Nationals hadn’t scored more than five runs during their losing streak.