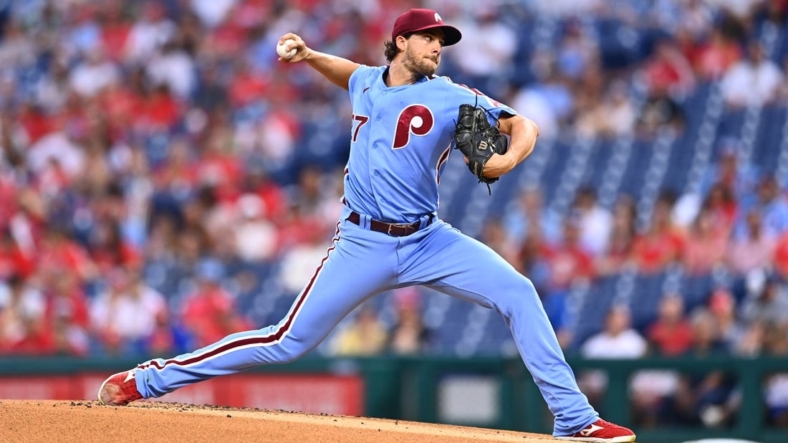 Aaron Nola tossed a five-hit shutout, guiding the host Philadelphia Phillies over the Cincinnati Reds 4-0 on Thursday to complete a four-game sweep.

Kyle Schwarber hit a solo home run to open the scoring. Edmundo Sosa added a single, a sacrifice fly and three RBIs and Bradley Zimmer had two hits for the Phillies, who have won five of six.

Nick Castellanos went 0-for-4 and had his 14-game hitting streak snapped.

The Phillies went ahead 1-0 with two outs in the bottom of the third inning when Schwarber blasted a mammoth home run to center field. Schwarber’s 35th homer of the season landed 451 feet from home plate.

The Reds managed only one hit through the first four innings, a single by Donovan Solano.

TJ Friedl was hit by a pitch to open the fifth. Aristides Aquino popped out to third in foul ground, Alejo Lopez flied out to center and Jose Barrero shattered his bat and popped out to second.

When Sosa hit a sacrifice fly in the fifth, Garrett Stubbs scored for a 2-0 lead.

Matt Vierling and Zimmer hit consecutive singles with one out in the seventh and Sosa followed with a two-run single to center for a 4-0 advantage.

In the eighth, Aquino hit a soft single to right and Lopez followed with a single to center. Nola proceeded to strike out Barrero, Austin Romine and Jake Fraley to end the threat.

The Reds placed runners at second and third with two outs in the ninth, with Friedl hitting Cincinnati’s only extra-base hit of the night, a double. Aquino grounded out to Nola to end the game.

Reigning National League Most Valuable Player Bryce Harper will be activated for Friday’s game against the visiting Pittsburgh Pirates. Harper has been out since June 25 with a broken left thumb.