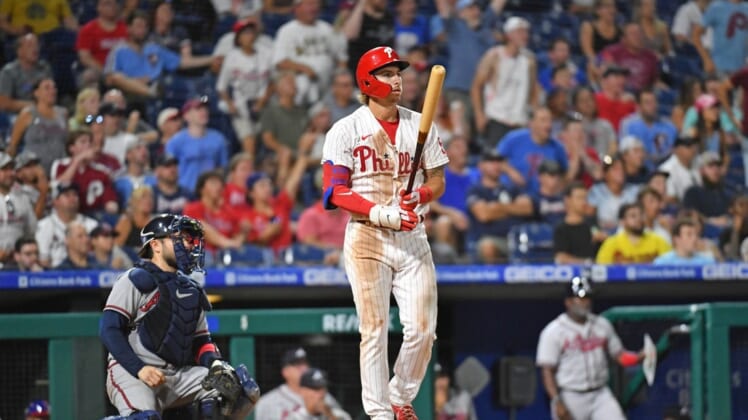 Bryson Stott may not have eye-popping statistics, but he continues to provide clutch hits for the Philadelphia Phillies.

The ever-improving rookie crushed a three-run home run off A.J. Minter with two outs in the eighth inning on Monday to give Philadelphia a come-from-behind, 6-4 victory over the visiting Atlanta Braves.

The Phillies will hope to maintain their momentum when they host the Braves again on Tuesday night.

Stott, who also doubled in the game, finished with five RBIs, the top single-game total for a Phillies rookie since Rhys Hoskins had a five-RBI game in 2017.

Stott ended the night hitting .196 for the year, but he produced another huge performance.

“The team never gave up on me,” Stott said on a postgame interview on NBC Sports Philadelphia. “They’ve been awesome and encouraging.”

Since Stott can play multiple positions on defense, he has been able to receive extra playing time because of injuries to Jean Segura and Didi Gregorius.

“Anytime you get a chance to play at this level, you want to play well,” Stott said. “It wasn’t the start I hoped for, but you’ve got to keep going.”

The Phillies struggled in the field on Monday and appeared to be on their way to a fourth straight defeat when they fell behind 3-0. After a rare three-game sweep by the Chicago Cubs, the Phillies rallied against one of the top teams in the National League.

Thanks largely to Stott.

“His numbers are not indicative of his at-bats,” Phillies interim manager Rob Thomson said. “A lot of that has to do with his first time in the big leagues. He probably put too much pressure on himself.”

Despite an impressive 35-13 record since June 1, the Braves will look to avoid a third consecutive loss.

“I feel like we did everything we could today,” said Minter, who has given up only two home runs all season. “We win these types of games nine times out of 10.”

Atlanta’s Marcell Ozuna had three hits and an RBI, and Austin Riley hit a pair of doubles to extend his hitting streak to 17 games.

With Adam Duvall sidelined for the remainder of the season following a left-wrist injury, manager Brian Snitker will have difficult decisions to make in the outfield. Ozuna came through on Monday, but Eddie Rosario and Guillermo Heredia also are options for left field.

“It’s tough because of the person he is,” Snitker said of Duvall. “They don’t make them better than Adam Duvall. No greater teammate.”

Snitker was asked specifically about Rosario, who can be a streaky hitter.

“It’d be easier to do in April,” Snitker said of playing Rosario every day. “It’s kind of like, realistically, where we’re at, we’re having to win games.”

Spencer Strider (4-3, 3.03 ERA) is scheduled to start for the Braves on Tuesday. The right-hander won his lone career appearance against the Phillies, when he threw 2 2/3 scoreless innings on May 25.

In his latest start, against the Washington Nationals on July 17, Strider struggled through four innings, allowing four hits and five runs.