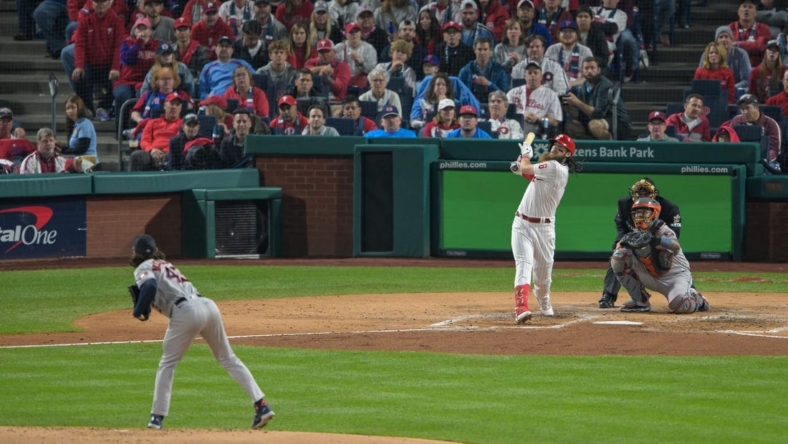 Game 4 will be held Wednesday in Philadelphia.

Suarez (2-0) gave up three hits and a walk while striking out four. Connor Brogdon, Kyle Gibson, Nick Nelson and Andrew Bellatti each threw one inning apiece to complete the shutout.

Houston starter Lance McCullers Jr. (0-1) lasted only 4 1/3 innings and allowed seven runs on six hits and one walk with five strikeouts. He gave up five homers, the most ever by a pitcher in a single postseason game.

The Phillies went ahead 2-0 in the bottom of the first inning when Harper launched a two-run shot to right field with two outs. It was Harper’s sixth homer of the postseason.

The Astros had runners on first and third with two outs in the second, but Chas McCormick was called out on strikes to end the frame.

Bohm and Marsh each hit a solo homer in the bottom of the second for a 4-0 lead. The Phillies became the first team in World Series history to hit three homers in the first two innings of a game.

Houston’s Jose Altuve popped out to in foul ground with runners on first and second to end a scoring threat in the fifth.

Philadelphia took a 6-0 advantage in the bottom of the fifth when Schwarber blasted a two-run homer to center. Hoskins followed with a solo shot to left for a seven-run lead.

Jeremy Pena and Alex Bregman each walked for the Astros in the eighth, but with two outs, Kyle Tucker flied out to the warning track in left.

Bellatti set the Astros down in order in the ninth.