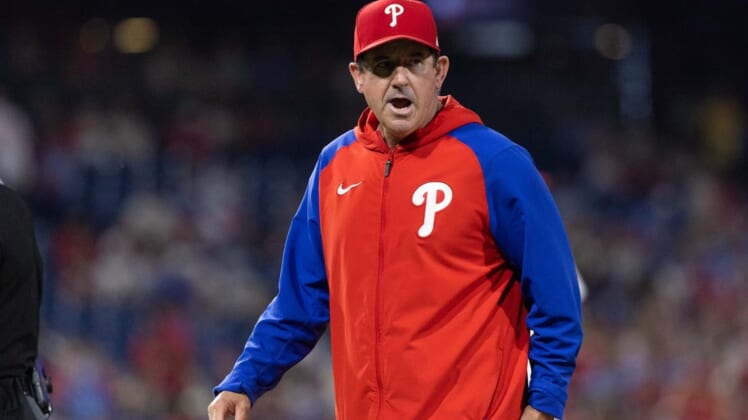 The Philadelphia Phillies probably won’t call it a turnaround in their season, but they certainly are heading in a different direction than they were a week ago.

The Phillies have won six in a row heading into the finale of a three-game road series against the Milwaukee Brewers on Thursday. Philadelphia is 5-0 since the team fired Joe Girardi as manager on Friday after the team won just five of his final 17 games in charge.

Girardi was replaced by interim manager Rob Thomson, who can already list on his resume that he is the first Phillies manager since 1915, and the first major league manager since Jim Leyland for the Detroit Tigers in 2006, to win his first five games at the helm.

The Brewers have been trending in the opposite direction lately.

They have lost five in a row and seven of eight since climbing a season-high 14 games above. 500 on May 30. Milwaukee has been shut out three times in the past five games, including 10-0 by the Phillies on Wednesday night.

“We got a lineup full of guys not feeling good at the plate right now,” Milwaukee manager Craig Counsell said. “We’ve got to weather the storm.”

Philadelphia didn’t have trouble seeing the ball on Wednesday.

The Phillies plan to send right-hander Zach Eflin to the mound for the series finale.

He gave up five hits, struck out six and walked one in a 10-0 victory.

Eflin was coming off a rare poor performance six days earlier against the New York Mets, when he surrendered seven runs and eight hits in six innings during an 8-2 loss.

Milwaukee is scheduled to start Corbin Burnes on Thursday.

Burnes (3-3, 2.50 ERA) threw seven shutout innings in an 8-0 win over the St. Louis Cardinals on May 29, but he struggled in his most recent outing. The right-hander yielded five runs and eight hits in a season-low 3 2/3 innings during a 7-0 loss against the visiting San Diego Padres on Friday.

The big blow was a three-run homer by Manny Machado in the fourth inning.

“It wasn’t bad,” Burnes said of his performance. “I didn’t command it well in the first two innings, but we kind of found it in the third and in the fourth. Obviously, the three-run homer hurt. He fouled off some good pitches and the slider that was middle down caught a little too much of the plate.”