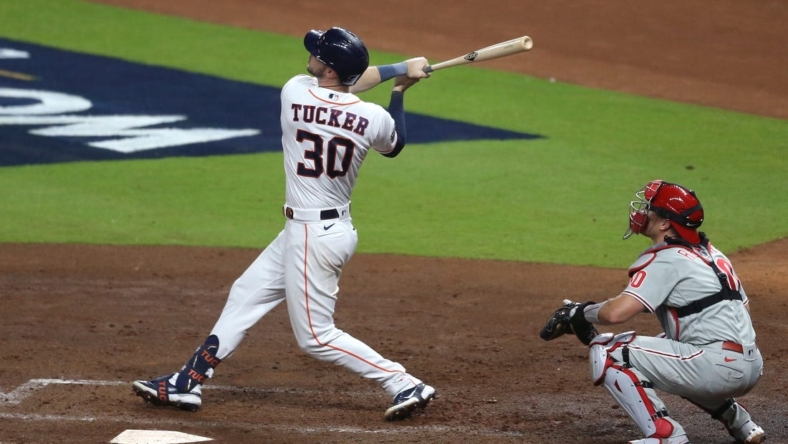 HOUSTON — J.T Realmuto clubbed a leadoff, opposite-field home run in the top of the 10th inning as the Philadelphia Phillies erased a five-run deficit and defeated the Houston Astros 6-5 in Game 1 of the World Series on Friday.

Realmuto drilled a 97.5 mph from Astros reliever Luis Garcia (0-1) just beyond the leaping attempt of Astros right fielder Kyle Tucker. The Phillies handed Houston its first loss of the postseason and will take a 1-0 lead in the best-of-seven series into Game 2 on Saturday.

Philadelphia became the first team to rally from five runs down to win a World Series game since the 2002 Anaheim Angels did it against the San Francisco Giants. That Giants team was managed by Dusty Baker, now the Astros’ manager.

Tucker supplied Houston a 5-0 lead by homering in his first two at-bats. His leadoff shot to right off Phillies starter Aaron Nola keyed a two-run second inning. His three-run blast off Nola in the third plated Jeremy Pena and Alex Bregman and made Tucker the first player in club history with a multi-homer game in the World Series.

However, the Phillies fashioned a rally against Astros right-hander Justin Verlander in the fourth. Rhys Hoskins hit a one-out single and went to third on Bryce Harper’s two-out single.

Nick Castellanos’ base hit plated Hoskins, and Alec Bohm followed with a two-run double to left that narrowed the deficit to 5-3.

Verlander needed 31 pitches to complete the fourth inning. Four batters into the fifth, the Phillies pulled even at 5-5 when Realmuto smoked a double to left-center field that scored Brandon Marsh and Kyle Schwarber, who had doubled and walked, respectively, to open the frame.

Nola and Verlander both allowed five runs on six hits and two walks while striking out five. Verlander lasted five innings, while Nola was done after 4 1/3 innings.

Philadelphia’s Seranthony Dominguez (2-0) struck out three of the six batters he faced. David Robertson earned his first save of the postseason by working around a one-out double from Bregman and a two-out walk issued to Yuli Gurriel in the 10th inning.

The Astros had the tying run at third and the winning run at second in the 10th when pinch hitter Aledmys Diaz grounded to third base for the final out.