Phillies look to get struggling offense on track against Rockies 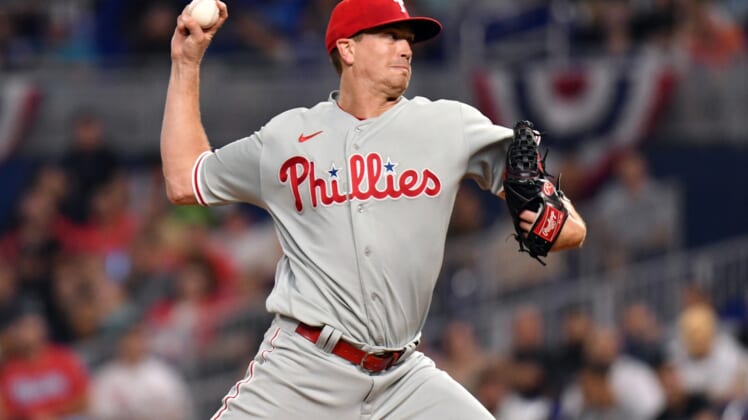 While it’s still early in the marathon season, the Philadelphia Phillies’ potent lineup continues to struggle.

They managed only five hits in a frustrating 1-0 loss to the Milwaukee Brewers on Sunday.

The Phillies dropped two straight to the Brewers and will now open a four-game series at home against the Colorado Rockies on Monday.

Rhys Hoskins and Kyle Schwarber are each hitting below .200 and reigning Most Valuable Player Bryce Harper went 0 for 4 Sunday to drop his average to .226.

Schwarber’s frustration became evident when he was ejected by home plate umpire Angel Hernandez in the ninth inning after being called out on strikes.

Harper was slotted into the designated hitter role once again since he’s dealing with a strain in the flexor tendon in his right elbow. Harper has been able to avoid the 10-day Injured List since the DH was introduced to the National League.

“I’ve never dealt with arm pain or anything like that even when I was younger,” Harper said. “So, I don’t know. What they’ve been saying is we’ll take it day by day and see how I feel.”

Like Aaron Nola’s strong seven-inning outing on Sunday, Gibson realizes how important it will be to keep the bullpen rested.

“I’m a big believer in the rotation bringing some consistency to the team,” Gibson said. “That’s what our job is.”

The Rockies will be searching for their third consecutive victory when they visit Philadelphia.

After a 13-0 drubbing against the Detroit Tigers, the Rockies responded with back-to-back wins.

They’ll now look to take that positive momentum on the road against the Phillies.

In Sunday’s 6-2 win over the Tigers, Charlie Blackmon led the way with four hits and Randal Grichuk added three for the Rockies, who are 4-1 on the road this season.

“Charlie is a great hitter and he’s proven that again and again over the years,” Rockies manager Bud Black said. “He’s going to get big hits and help us win games.”

Freeland was recently rewarded with a five-year, $64.5 million contract and he’s ready to prove his mettle for the franchise.

“Look at the group of guys that we have right now,” Freeland said. “A strong core group of us have been together for a long time and are sticking together for the next handful of years.