Phillies look to build on offensive outburst vs. Rockies 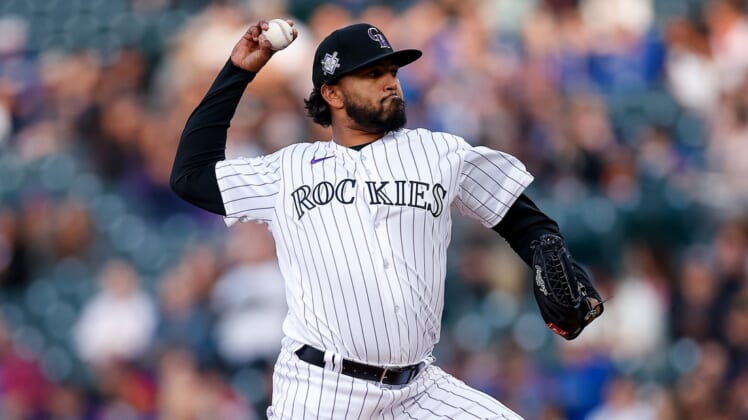 They broke out for eight runs in the opener of a four-game series against the Colorado Rockies on Monday. Philadelphia will look to build on the 8-2 win when it hosts the Rockies once again on Tuesday.

Bryce Harper launched a 417-foot home run to center field for Philadelphia on Monday, and Rhys Hoskins snapped out of a slump with three hits. Aside from the solo homer, the Phillies manufactured the other seven runs in a variety of ways.

“It was an angry swing,” Harper said of his homer during a postgame interview on NBC Sports Philadelphia. “It felt good.”

Phillies manager Joe Girardi said that he hadn’t been concerned with his offense’s slow start.

“I think a lot of these guys are going to heat up,” Girardi said. “I believe that in my heart.”

Winning pitcher Kyle Gibson was happy for the support.

The Tuesday game is due to feature a rematch of the pitchers who met last Wednesday in Denver, with Phillies right-hander Zach Eflin (0-1, 3.95 ERA) opposing Rockies right-hander German Marquez (0-0, 4.67).

Neither pitched well in a game the Phillies won 9-6 to salvage the finale of a three-game series. Eflin gave up four runs (two earned) on eight hits and no walks in 5 2/3 innings. He struck out five. Marquez yielded four runs on eight hits and two walks with five strikeouts in six innings.

Despite serving up three home runs in the no-decision, Marquez said of his outing, “Today was a lot better with my fastball command. The whole game I was feeling good.”

Eflin has struggled in five career starts against the Rockies, going 1-3 with a 6.49 ERA.

Marquez, a first time All-Star last season, is 3-1 with a 3.21 ERA in seven career starts against the Phillies. Dating back to last season, Marquez is winless in six consecutive outings, pitching a 7.12 ERA in those appearances.

The Monday game was all Phillies after the Rockies received solo home runs from Connor Joe and Randal Grichuk to go ahead 2-0 after two innings. Philadelphia scored eight unanswered runs the rest of the way. Three Colorado errors contributed to the team’s downfall.

“We understand the capability that we have and what we can do,” said Rockies pitcher Kyle Freeland, who took the defeat after allowing four runs, but only one earned, and striking out seven in five innings. “It was one bad loss. That’s not the script of our future at all.”

Rockies left fielder Kris Bryant, who signed a mammoth seven-year, $182 million free agent contract in the offseason, snapped an 0-for-16 slump with a single on Monday.

Joe socked his fourth homer of the season, half of the total he managed last year in 179 at-bats for the Rockies.