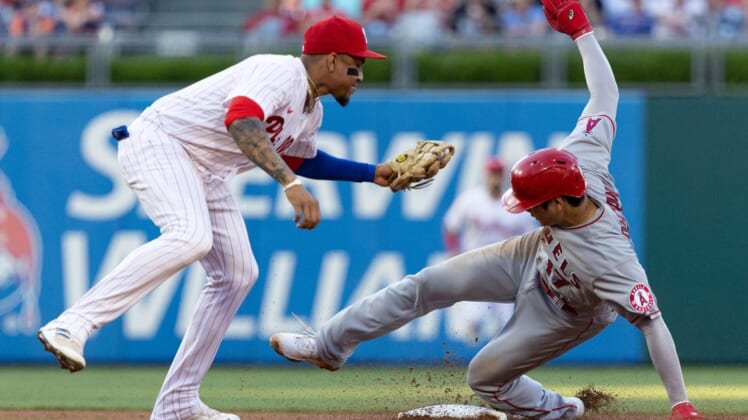 The Philadelphia Phillies scored five runs in the first inning and cruised to a 7-2 victory over the visiting Los Angeles Angels Saturday night.

Phillies starter Zach Wheeler (4-3) gave up two runs on six hits and two walks in six innings, striking out nine and sending the Angels to their 10th loss in a row.

The 10-game losing streak for the Angels is their longest since an 11-game slide in 2016.

Angels center fielder Mike Trout is at the heart of the club’s struggles — he went 0 for 4 with three strikeouts on Saturday and is now hitless in his last 23 at-bats, the longest hitless streak of his career. His last hit came May 28 on a seventh-inning homer against Toronto.

Catcher J.T. Realmuto led the Philadelphia offense with three doubles, and he also threw out Shohei Ohtani trying to steal second. Johan Camargo had two hits and drove in four runs, including a two-run single in the eighth that pushed the Phillies’ lead to five runs.

Just like he did on Friday, Kyle Schwarber got the Phillies going in the bottom of the first inning. Friday, he homered on the first pitch by an Angels pitcher; on Saturday, he doubled off Angels starter Michael Lorenzen (5-3) on the first pitch.

Unlike Friday, however, the Phillies didn’t stop there in the first inning. Lorenzen had trouble finding the strike zone, walking four in the inning. He also allowed a two-run double to Realmuto and a two-run single to Camargo.

A fifth run scored in the inning on a throwing error by Lorenzen.

Lorenzen, though, turned things around. He pitched into the sixth inning, not giving up another run and allowing the Angels to creep back into the game. In all, Lorenzen gave up five runs on five hits and five walks, striking out nine, in 5 2/3 innings.

Angels first baseman Jared Walsh had an RBI single in the third inning and an RBI double in the fifth, both hits coming with two out, cutting the Angels’ deficit to 5-2.