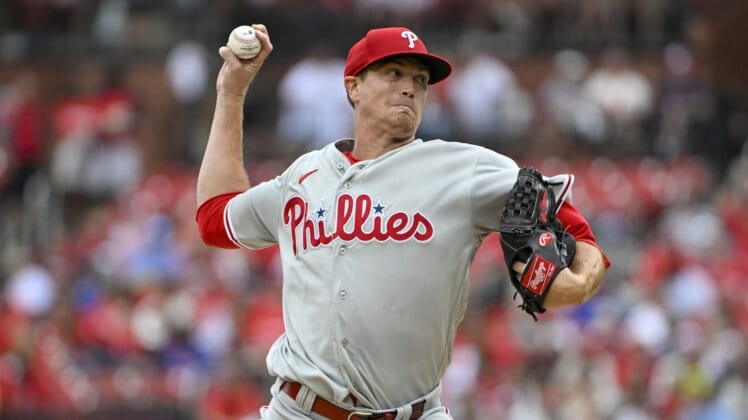 Alex Bohm decided the game with his ninth-inning sacrifice fly off Cardinals reliever Giovanny Gallegos (2-3). After hitting two solo homers Friday night in the Phillies’ 2-0 win, Bohm has driven in the only three runs in the first two games of this four-game set.

The Phillies won their third in a row and fifth in their past six games, including four shutout wins in a six-game span for the first time since August 1969. Adding to Sunday’s 4-0 blanking, they have held the Cardinals scoreless for 27 straight innings — the first time the Phillies’ staff has done so against St. Louis since a 36-inning streak in 1944.

Gibson stymied the Cardinals for seven innings while allowing the two hits and striking out five. This was quite a rebound for Gibson, who allowed five first-inning runs on four consecutive homers when he faced the Cardinals on July 2.

Alvarado (3-1) handled the eighth inning and Knebel closed out the game, stranding runners at second and third, for his 12th save.

The Phillies threatened in the second inning when Darick Hall drew a leadoff walk and took second base on Bohm’s one-out single. But Bryson Stott lined into an inning-ending double play.

Gibson allowed a two-out double by Lars Nootbaar in the fifth inning, then got Edmundo Sosa to hit an inning-ending groundout.

Corey Dickerson drew a leadoff walk in the eighth inning and moved to second on an error. Albert Pujols got an intentional walk with two outs, but Nolan Gorman flied out to strand them.

The Phillies finally broke the scoreless tie in the ninth inning.

Hall led off with a double. Mickey Moniak pinch-ran for Hall, moved to third on a bunt single by Didi Grigorius and scored on Bohm’s sacrifice fly.

Knebel’s save was stressful. Juan Yepez drew a leadoff walk in the bottom of the ninth inning and raced to third as Paul Goldschmidt reached on an error by Bohm. Goldschmidt stole second base as Nolan Arenado struck out. But Dylan Carlson grounded out and Dickerson flied out to end the game.