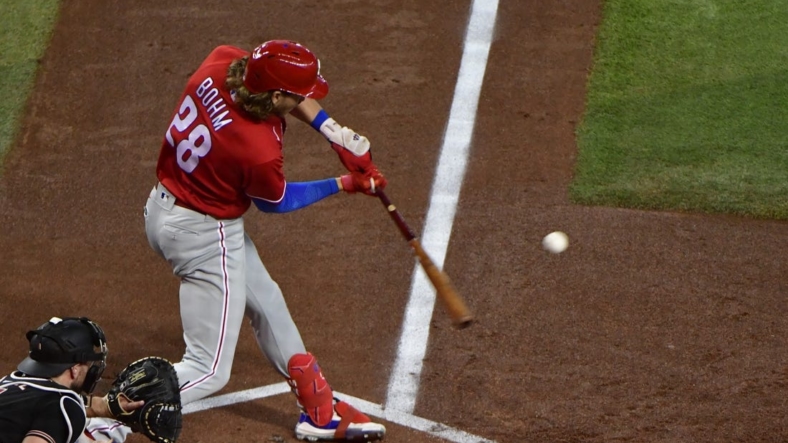 Brandon Marsh tripled among his three hits and drove in three runs as the Philadelphia Phillies established season bests for runs and hits while steamrolling the Arizona Diamondbacks 18-2 on Wednesday night at Phoenix.

Bryce Harper and Rhys Hoskins also had three hits apiece as the Phillies had 22 overall. Six other players had two hits and Alec Bohm and J.T. Realmuto each scored three times as Philadelphia avoided being swept in the three-game series.

Bailey Falter (3-3) allowed one run and five hits in 6 1/3 innings for the Phillies. He struck out six and walked none while winning his third straight start.

The victory snapped Philadelphia’s three-game skid and also halted a seven-game road losing streak against Arizona.
The Phillies were 15-for-29 with runners in scoring position.

Jake McCarthy homered for the second straight game for the Diamondbacks, who allowed their most runs of the campaign while having a season-high five-game winning streak halted.

The Phillies took charge with a four-run third inning off Tommy Henry (3-3) to take a 5-0 lead.

Harper’s single scored the first run of the inning, Segura dropped a two-run single just inside the right field line in front of McCarthy, and Matt Vierling capped the frame with an RBI single.

McCarthy homered to right, his sixth of the season, with one out in the fourth to get Arizona on the board.

Philadelphia responded with four runs in the fifth. Segura’s RBI single made it 6-1, Marsh hit his two-run triple later in the inning and scored on a wild pitch by Reyes Moronta.

The Phillies poured it on with seven runs in the eighth off Luis Frias. Vierling and Marsh had RBI singles, Edmundo Sosa had a run-scoring double and Marsh scored on a wild pitch to make it 15-1. Rhys

Hoskins ripped a run-scoring double, and pinch-hitter Garrett Stubbs capped the uprising with a two-run double off position player Carson Kelly, with those last two runs charged to Frias.