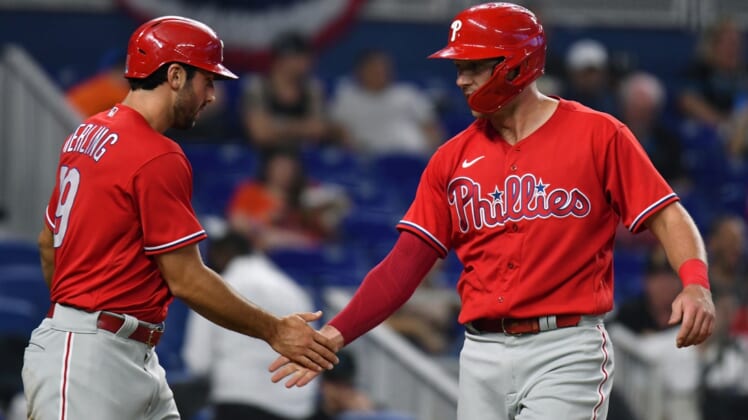 Berti and first baseman Garrett Cooper collided and crashed to the turf at the end of the rundown. Cooper suffered a left elbow contusion and left the game in the fourth inning.

Jorge Soler (two-run homer) and Avisail Garcia (solo blast) led Miami’s offense. It was the first homer as a member of the Marlins for both players.

Trevor Rogers (0-2) took the loss, allowing four hits, four walks and seven runs in 1 2/3 innings. It was the shortest outing of his 34 career starts.

Philadelphia scored two runs in the first. Rhys Hoskins and Harper each drew one-out walks, and Castellanos singled to load the bases. Alec Bohm lofted a sacrifice fly before Harper’s steal of home.

The Phillies scored six runs in the second, knocking Rogers out of the game. Matt Vierling hit an RBI double, Bohm added an RBI single, and Harper and Johan Camargo each pounded two-run doubles.

Miami got on the board in the fifth. Berti doubled off the wall on an opposite-field drive to right and Soler followed by pulling his 428-foot homer to left.

The Phillies got both of those runs back in the sixth. J.T. Realmuto reached on shortstop Joey Wendle’s fielding error and Harper walked with one out. Castellanos stroked an RBI single and Bohm’s sacrifice fly made it 10-2.

Garcia’s homer in the eighth cut Miami’s deficit to 10-3. That shot was measured at 443 feet.