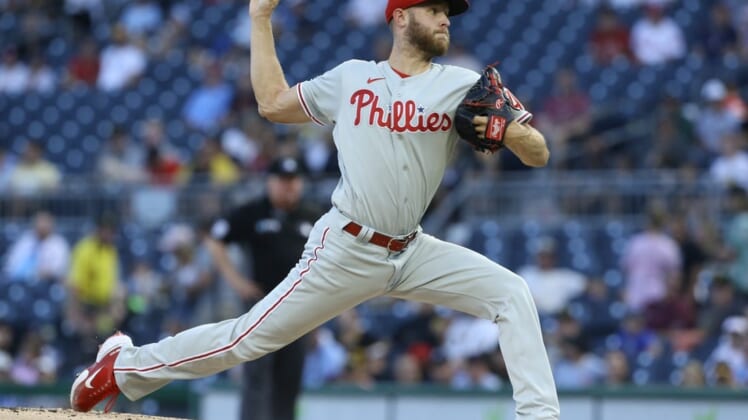 Nick Castellanos, Alec Bohm and Didi Gregorius each added RBI hits for the Phillies, who have won three of four.

Serathony Dominguez got the final two outs for his sixth save.

Cal Mitchell homered, Tyler Heineman added a two-run single and Kevin Newman a two-run triple for the Pirates, who scored five in the ninth but lost their fourth in a row.

Pittsburgh starter Zach Thompson (3-8) gave up seven runs for the second straight start, this time in 5 2/3 innings, with 11 hits, four strikeouts and no walks.

In the first, Rhys Hoskins singled to center with one out. Bohm extended his hitting streak to 13 games with a single. They both scored on Hall’s triple off the wall in right-center. Castellanos drove in Hall with a base hit to left to give Philadelphia a 3-0 lead.

Matt Vierling left off the Phillies’ second inning with a single. One out later, he took second on Schwarber’s single to center. Another out later, Bohm brought home Vierling with a base hit to right-center to increase it to 4-0.

The Phillies staged a two-out rally in the sixth to add to their lead. Vierling singled to left and advanced to third on Garrett Stubbs’ single to center. Schwarber homer to right-center made it 7-0 and chased Thompson.

In the seventh against Chris Stratton, again with two outs, Castellanos, Bryson Stott and Gregorius hit consecutive singles to up it to 8-0.

Pittsburgh got on the board in the bottom of the seventh. Bligh Madris drew a one-out on four pitches. After Greg Allen struck out, Mitchell hit his third homer, a liner to center, to make it 8-2.